New York-based startup Yank Technologies is developing a wireless induction charging technology that motorists will be able to use to charge multiple smartphones.

Wait, aren’t such systems already available? Yes, the technology has been around for a while, at least in a limited capacity. Chrysler and Toyota began offering such options about seven years ago, with General Motors following suit shortly thereafter.

So, what’s different? Whereas most current systems require users to place their phone on a charging pad, Yank’s technology is completely contactless. 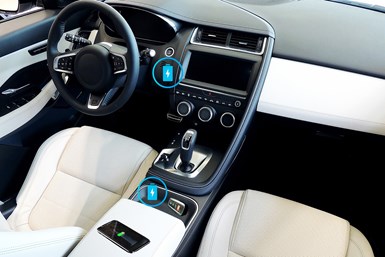 This means phones can be charged from a distance, while they’re being held and/or in use, explains Josh Yank, who co-founded the company with chief engineer Jin Li in 2014.

Running off the car battery, a wireless 25-watt system can simultaneously charge three phones within a 1.5-ft radius, according to Yank. With three to four devices, he says, the entire passenger compartment of a midsize car could be turned into a wireless charging hotspot.

For example, Yank’s system could be used to charge a seat motor. This would reduce the need for physical connections, thus displacing bulky wiring harnesses.

Among the obvious benefits of such a setup are improved manufacturing logistics and lower costs. It also would provide greater design freedom, which, in turn, could enable more functionality—such as being able to rotate a seat. In addition, Yank says, the power module could be used to track how motorist use a specific feature.

Yank’s near-field communication system features an integrated antenna array and amplifier, both of which have been enhanced to handle higher power loads. 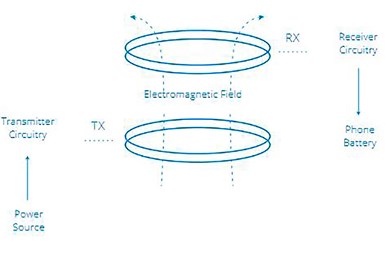 The antenna’s intrinsic quality, or “Q score” (inductive reactance divided by resistance), is 10 to 20 times higher than a charging pad, according to Yank. The higher the score, the better: more power delivered farther.

The new system also passes FCC radiation tests. Its specific absorption rate is 0.6 w/kg, which Yank notes is less than half the level generated by a typical cell phone.

Yank says it is in talks with multiple OEMs and Tier 1 suppliers about potential programs for 2023-model applications. The company has a development contract with an unnamed Tier 1 supplier to power various interior components and is working with an aftermarket accessory company to charge dashboard cameras. It also foresees opportunities in other markets, such as aerospace and robotics.

The initial focus, though, is on launching a stand-alone consumer device called the MotherBox. Yank will use it, which essentially works the same as the car-based charger, to generate interest in the technology.

The company has received pre-orders totaling more than $315,000 for the MotherBox, which is priced at a discounted rate of $125. Production (through a contract manufacturer in China) is due to launch in the spring.