Nissan Motor Co.’s Infiniti unit plans to offer electrified variants of most of its models within the next two years.
#asia #Nissan #Infiniti

Nissan Motor Co.’s Infiniti unit plans to offer electrified variants of most of its models within the next two years.

The vehicles will ride on a modular platform that can accommodate an all-electric or series hybrid drivetrain. The latter will team a pair of electric motors with an updated version of Infiniti’s 1.5-liter variable-compression turbocharged engine/generator, which will serve as a range extender. 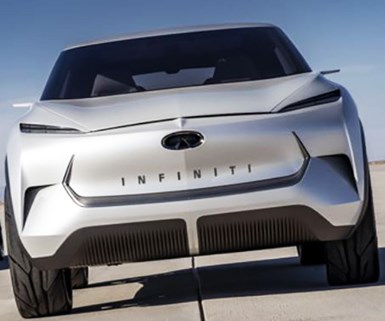 Infiniti’s first pure EV is expected to be a production version of the QX Inspiration concept crossover model unveiled at the Detroit auto show in January.

The new hybrid was previewed by the Qs Inspiration sedan (left) that bowed at the Shanghai auto show in April. Infiniti says the setup will enable the use of a small lithium-ion battery (3.5- to 5.1-kWh) and as much as a 500-mile driving range.