The QX60 midsize crossover is Infiniti’s top-selling model in the U.S. and trails only the smaller QX50 on a global basis.

Based on the new QX60 Monograph concept, the next-generation 3-row crossover will be even more of a standout.

Nissan’s luxury unit took the wraps off the Monograph on Thursday during a virtual event from its headquarters in Yokohama, Japan. The vehicle also will be shown at the Beijing auto show, which starts on Saturday. 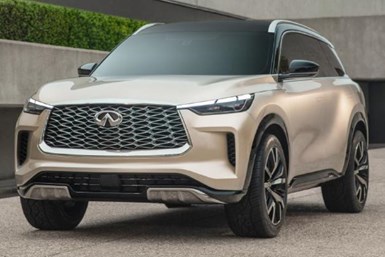 Described as a close-to-market design study, the QX60 Monograph is sleeker and more athletic than the current model. It also ups the ante on premium appointments.

Here’s how Alfonso Albaisa, Nissan’s senior vice president of design, explains the vision of the concept: "In crafting this Monograph, we wanted to change the tonality of the QX60 and transform the nameplate from a sculptural and architectural point of view.” 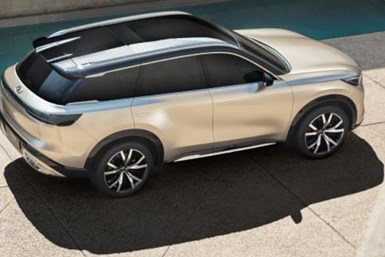 “We raised the visual center of gravity, giving it a strong, straight shoulder line that carries through to the hood, with a higher, more prominent grille, and longer-looking cabin to deliver a sense of muscularity and a commanding presence," Albaisa adds.

In addition to next year’s redesigned QX60, Albaisa says, the Monograph previews where Infiniti’s overall design language is headed.

The focus for now is squarely on the exterior. In fact, Infiniti didn’t show the interior of the Monograph at all. There’s also no mention of the powertrain or other mechanicals and performance features.

Here are some highlights: 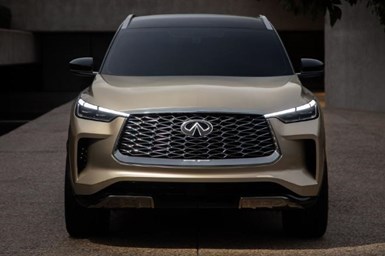 Infiniti says the redesign builds on the current model’s strengths of spacious packaging and family appeal.

Up front is Infiniti’s large double-arch grille and horizontal hood. Infiniti says the origami-inspired folds of the grille embody a sense of “ma,” the Japanese term for spatial harmony.

In profile, the Monograph the short front overhang is accentuated by the gentle rake of the A-pillar and sloping roofline.

At the rear, the wide body and track, paired with horizontal window line are designed to convey poise and stability. Large "Infiniti" text is stamped across the hatchback.

The roof also boasts a geometric pattern with a series of intricate perpendicular lines, which Infiniti says draws inspiration from the folds of a silk kimono and the structures of Japan's modern architecture. The black panoramic design creates a feeling of openness and is meant to offset the reflective platinum hue of the concept’s body.

The front and rear light treatment is described as an intricate “digital piano key” pattern that lends a futuristic appearance. Up front, the headlights have a raised eyebrow look. The rear lamps wrap around the tail in a continuous swoop.

The logo in the grille illuminates when the driver approaches the QX60, and then fans out across the LEDs above the headlights.