Will this mid-size crossover be the boost the company needs?
#Acura #Infiniti

It was on January 1, 2003, that Infiniti introduced a vehicle that it said was based on the theme of a “Bionic Cheetah.” Yes, that is true.

It was the FX45, a crossover that was meant to have characteristics of a sports car and a luxury vehicle, all wrapped up in one. 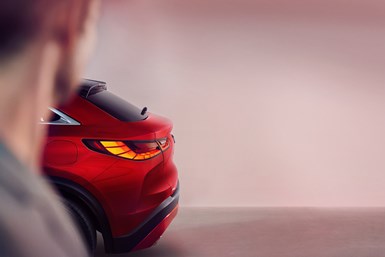 Infiniti will show the entire QX55 in November. (Image: Infiniti)

Information is scant at most. That is, it is a mid-size crossover. It has “the sleek profile of a sports coupe.” It will have “innovative technologies.”

And based on the photo, it has interesting taillamps.