Rollout starts with 2021 BMW 5 Series, other brands and models to follow next year
#BMW #Daimler #Hyundai

Apple’s latest software update, iOS 14, will allow users to unlock, lock and start their car via a smartphone app without having to carry a physical key.

The technology, which was announced Monday during Apple’s virtual WWDC (Worldwide Developer’s Conference), will debut later this year with the BMW 5 Series. Other models and brands are expected to begin to offer the system next year.

Built on the iPhone’s UWB U1 chip, Apple’s digital key system uses near-field communication (NFC) technology that allows devices to wirelessly exchange information when they are in close proximity—in this case, a few centimeters—of each other. 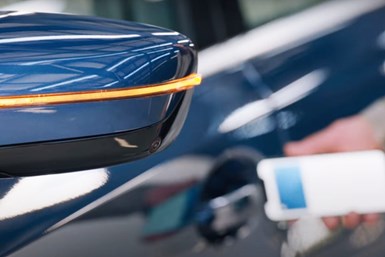 Drivers will simply tap their phone on the door handle to unlock the vehicle. Once inside, the car can be started by placing the iPhone on the wireless charging pad in the center console.

Apple plans to eventually switch to an ultra-wideband technology. This will enable the system to work from further away, automatically unlocking the door as a driver approaches the vehicle while carrying the phone in a pocket or purse.

Activation codes can be sent to multiple users to provide access to the vehicle for family members and friends. When doing so, owners can set different driving profiles, such as speed restrictions for teen drivers.

The system also can be used for car-sharing services.

If the phone is stolen, owners can disable the digital key function via their personal iCloud.

The Car Connectivity Consortium, which includes dozens of carmakers, suppliers and tech companies (including Apple), also is developing industry standards for the emerging technology. The goal is to create a standardized authentication protocol for phones and cars to allow for interoperability across car and phone brands.

Apple is a relative latecomer in introducing the technology. But its system could quickly spread across the industry, similar to its CarPlay infotainment integration system. Apple claims that technology is now available on 97% of new vehicles.