A final decision is due in March about whether Mahindra’s Roxor offroader looks too much like Jeep’s iconic CJ military-style SUV.
#Mahindra #Jeep #Carbon

A decision to settle Jeep’s legal wrangle with India’s Mahindra over the latter’s lookalike Roxor SUV is headed for resolution in March.

That’s when the U.S. International Trade Commission (ITC) says it will wrap up its two-year review of the design dispute.

Jeep’s complaint is that the $15,000 Roxor, which Mahindra began producing in Michigan in 2018, bears an uncanny resemblance to the iconic Jeep CJ.

No surprise there. Mahindra first obtained a license in 1947 to assemble the CJ, a civilian version of the World War II Jeep, from Willys, which invented the vehicle. Willys even gave Mahindra permission to use the Jeep and CJ trademarks in India. 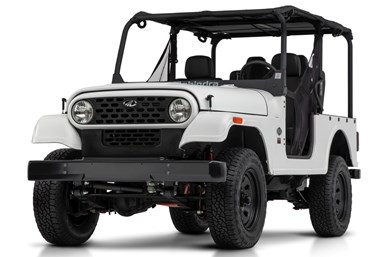 Mahindra has been making the CJ, currently called the Thar in India, pretty much ever since.

Mahindra failed several years ago to break into the American market with its diesel-powered Scorpio pickup truck. But by 2018, it was ready to try again with the Thar/Roxor. Two years ago, it began assembling the Roxor from kits in a factory outside Detroit, touting the SUV as a strictly off-road vehicle.

When Mahindra launched U.S. production, FCA immediately filed an infringement lawsuit with the ITC and asked for an injunction to block Roxor sales. 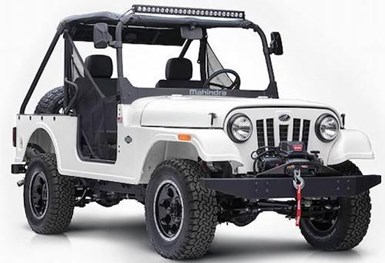 Mahindra responded with its own lawsuit. The Indian company asserted that it had secured a deal with FCA in 2009 that allows such sales. It also pushed ahead with the Roxor, marketing it through a network of 390 dealers of “powersports” off-road vehicles.

The commission’s ruling in March could go either way. Two months ago, one of the ITC’s administrative judges issued an initial opinion agreeing with FCA’s complaint. The judge recommended that the ITC issue a cease-and-desist order.

Both sides say they expect to prevail. But Mahindra also has introduced a new version of the Roxor that addresses one of FCA’s biggest complaint about the original model: a grille that looks suspiciously like Jeep’s signature seven-slot design.

The 2020 Roxor replaces the SUV’s former five-slot “fan” grille with a cheese-grater design. But the new model’s round headlights and overall body design remain the same—and very CJ-like.

Mahindra needs a resolution to this. The company has big plans for the American market. It’s one of five finalists to supply next-generation delivery vehicles to the U.S. Postal Service. A decision on that contract is imminent.

If all goes well, the company eventually wants to introduce some of its passenger car models in the U.S. But first things first.