The carmaker unveiled the premium 4x4 in concept form (along with its Wrangler 4xe plug-in hybrid sibling) this week. Production is due to start in the second quarter next year at FCA’s Warren, Mich., truck plant.

Here are a few takeaways:

It’s Worth the Wait

The concept 7-seater, which is expected to closely approximate the production model, lives up to its heritage. 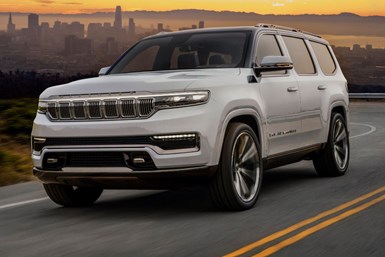 The new Grand Wagoneer is inspired by the original (produced from 1984 to 1991) but features an unprecedented “level of premium execution” for FCA, according to Design Chief Ralph Gilles. “We strived to create an elegant design with a timeless silhouette, featuring countless beautifully crafted details that come together to give it an undeniable presence.”

While some of the concept’s flair is unlikely to go any further—such as the 3D-printed elements in the wheel spokes and illuminated grille slots, the base design makes a statement.

The retro-styled boxy styling is accentuated by square side windows framed by thick, body-colored pillars. Other highlights include thin LED headlights, muscular fenders and a panoramic sunroof.

Jeep boasts that the new Grand Wagoneer’s interior will be the pinnacle of ultra-premium for a full-size SUV. 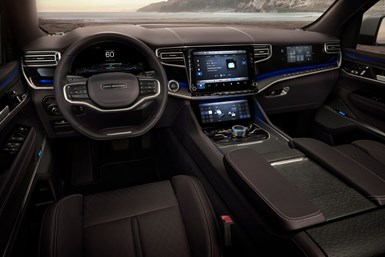 The assertion is backed up with a host of high-end sustainable materials—including wood inlays, raw aluminum, onyx glass and a recyclable microfiber suede headliner—elegant appointments and a McIntosh sound system with 23 speakers and a 24-channel amplifier.

First and foremost, however, the Grand Wagoneer’s interior is all about its displays. The vehicle features seven digital display screens with a combined total diagonal area spanning more than 6 ft.

The setup includes a 12.3-inch instrument display behind the SUV’s two-spoke steering wheel and a center-mounted 12.1-inch center infotainment unit with a 10.25-inch system below it that encompasses climate and seat controls. Rounding out the front seat array is a 10.25-inch screen (with a privacy film) on the far-right side of the dashboard, allowing shotgun passengers to access the infotainment system or view their own content.

The middle row gets three screens, including a “comfort display” mounted on the center console and separate units for occupants in each of the two captain’s chairs. There are no displays in the third row. 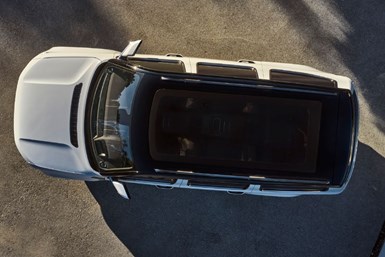 The new Grand Wagoneer also will feature plenty of advanced drivetrain and off-road features, including:

In addition to the top-end Grand Wagoneer, Jeep also will offer a base Wagoneer and several other variants. The entry-level model will start at about $60,000, while a fully loaded Grand Wagoneer will top out at more than $100,000. 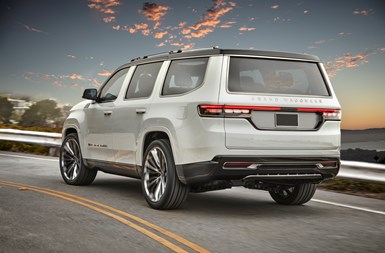 “Our new Grand Wagoneer Concept marks the first step in the rebirth of Wagoneer,” says Christian Meunier, Jeep’s global president. The nameplate, he adds, ultimately will become “a portfolio of vehicles that will once again define American Premium, making it the standard of sophistication, authenticity and modern mobility.”

The new models will expand Jeep’s SUV lineup into the fullsize segment, competing against everything from mainstream GMC models to premium competitors such as Cadillac and Range Rover.