Future self-driving vehicles are expected to have flexible seating systems that allow occupants to sit sideways or backwards as they interact with each other, relax, watch videos or work during road trips.

In theory, this seems like a great idea that could enhance everyone’s overall in-vehicle experience. Or it could have the opposite effect...and make passengers carsick.

As many as 70% of travelers already are susceptible to some form of motion sickness, according to Jaguar Land Rover. The condition is exacerbated when a person’s eyes observe information that is different from what is sensed by the inner ear and body movements, such as when a passenger is reading and/or isn’t facing forward. 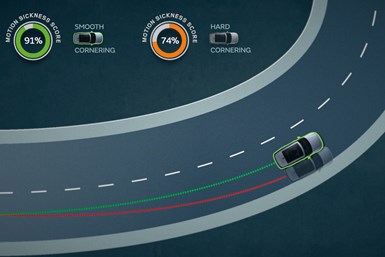 To help minimize the risk of sickness, JLR is developing a system to smooth the ride characteristics of self-driving cars based in part on biometric sensors and customized settings.

During the first phase of the project, JLR evaluated data collected over 20,000 miles of travel, including a mix of real-world and simulated driving, to create a passenger “wellness score,” which calculates how susceptible a person is to feeling carsick. Based on the scores, various vehicle features—such as seating position, suspension, steering, HVAC and infotainment settings—can be automatically adjusted to adapt to individual needs.

JLR now is using the data to fine-tune its autonomous vehicle technologies to enable smoother acceleration, braking and lane positioning. The dynamic control system is expected to be especially useful during hard cornering and other aggressive maneuvers. 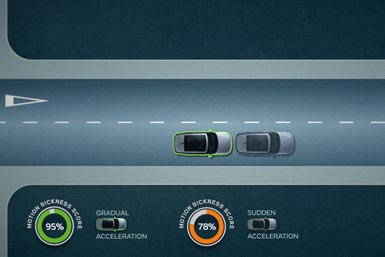 JLR claims the integrated customized approach can reduce the impact of motion sickness by as much as 60%.

Advanced machine learning will allow the system to make further improvements over time based on updated, driver-specific data as well as new information collected from JLR’s overall autonomous vehicle fleet.

The technology can be applied to any vehicle equipped with advanced driver-assist systems, such as adaptive cruise control and lane-monitoring.

JLR plans to introduce the system in an unnamed model in the near future.