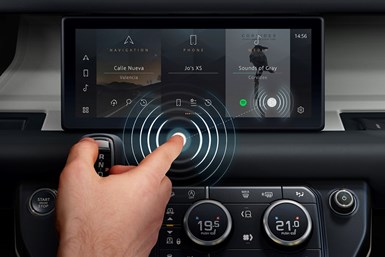 Jaguar Land Rover has developed a contactless touchscreen system to reduce the transmission of bacteria and viruses, including COVID-19, and improve driving safety.

The carmaker, which developed the concept with researchers at the University of Cambridge in England, claims its “predictive touch” technology is more precise and faster than current gesture-control systems, such as those introduced by BMW and Volkswagen in recent years.

JLR-Cambridge’s patented technology uses artificial intelligence and sensors to quickly predict a user’s intended target on the touchscreen—including entertainment settings, temperature controls and satellite navigation—without the person actually having to touch anything.

Cameras or radio frequency-based sensors, which the carmaker notes are increasingly common in consumer electronics, track a motorists’ movements, gestures and eye direction. This is combined with contextual information such as user profile, interface design and situational conditions to infer the user’s intent in real time, according to the partners.

“Predictive touch technology eliminates the need to touch an interactive display and could therefore reduce the risk of spreading bacteria or viruses on surfaces,” says JLR tech specialist Lee Skrypchuk.

Lab and road tests indicate the system also can cut a driver’s touchscreen use time in half and reduces the need to look away from the road.

“Touchscreens and other interactive displays are something most people use multiple times per day, but they can be difficult to use while in motion, whether that’s driving a car or changing the music on your phone while you’re running,” adds Cambridge engineering professor Simon Godsil.

JLR claims the new technology can be easily integrated into existing touchscreen devices—if the proper sensory data is available to support the machine learning algorithm. But it didn’t provide a commercialization timeline for putting predictive touch into future Jaguar or Land Rover models.

The innovation is part of JLR’s Destination Zero initiative to enhance safety and wellbeing. The goal of the program is zero accidents, zero emissions and zero congestion.

In some cases, this means taking a hands-off approach.