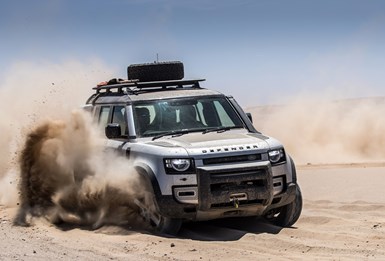 JLR is asking the U.S. International Trade Commission (ITC) to block imports of certain Audi, Lamborghini, Porsche and VW brand SUV/crossovers it claims are using its system without permission.

The company’s goal is to pressure VW to pay up for its continued use of the technology.

JLR customers have been able for years to choose those settings manually. The recently upgraded Terrain Response 2 Auto system can sense driving conditions and select the appropriate mode automatically.

The British carmaker also has filed patent lawsuits against the same VW Group brands in federal courts in Delaware and New Jersey, Bloomberg reports. In both cases, the filings specifically demand cash compensation from VW.

Unlike federal courts, the ITC can’t impose financial penalties. But the commission does have the ability to ban imported products, and its decisions generally come faster than those from U.S. courts.

This isn’t the first time JLR has gone to battle over this issue. The company sued VW’s Bentley unit two years ago, claiming the “Drive Dynamics” feature used in the ultra-luxury brand’s Bentayga crossover vehicle is a clone of the Terrain Response system.

That case is scheduled to go to trial in February.