Karma Automotive has big plans for its E-Flex platform to help expand its own lineup and provide the basis for future EVs built by other carmakers. 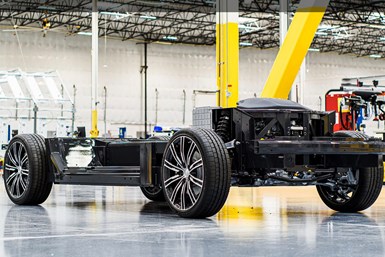 This includes five body styles—ranging from mainstream cars and crossovers to high-performance models and self-driving utility vans—along with various battery and motor configurations.

The strategy is simple and familiar; it’s called economies of scale.

But EVs take the concept to the next level: They’re expensive to develop and demand in the U.S. is very limited (other than for those wearing a Tesla badge). This puts sharing platforms and components across multiple models at a premium.

Karma isn’t alone in trying to supply its chassis to competitors. Other startups are taking a similar approach and already have met with some success. Rivian and Canoo, for example, have landed contracts with Ford and Hyundai, respectively, while Bollinger Motors is targeting Class 3 commercial truck applications with its E-Chassis.

The competition also includes several traditional automotive heavyweights. Chief among them is Volkswagen Group, which previously has said it was in talks with other carmakers about using its modular MEB platform that is due to carry 27 EVs across VW Group brands by 2023. Meanwhile, Toyota is working with its Subaru and Suzuki affiliates on future EVs.

COVID-19 and Other Concerns

Karma, which was created in 2014 when the assets of bankrupt Fisker Automotive were acquired by China’s Wanxiang Group, restructured last October in a bid to jumpstart sales. The plan included marketing its technical expertise—including artificial intelligence and autonomous vehicle know-how—and excess production capacity to other carmakers.

But the situation could soon become dire as the impact of the coronavirus spreads throughout the economy.

Making matters worse for EV makers is the recent plunge in fuel prices, which lengthens the payback period for premium-priced “green” models. This was exacerbated by the Trump administration’s decision to soften upcoming fuel economy and emissions regulations.

In addition to the Revero’s E-Flex chassis, Karma is developing a new platform for full electric vehicles.

The company’s first EV is due next year. Among the possibilities are an SUV/crossover and a production variant of last year’s high-powered SC2 concept, which generates 1,000 hp and boasts a zero-60 mph time of just 1.9 seconds.

The 2020 Revero GT teams a 28-kWh battery and a pair of electric motors with a BMW-sourced 1.5-liter turbocharged 3-cylinder engine. The latter is used as a range extender.