Karma Automotive is back with yet another variant of its E-Flex electric car platform, this one for supercars.

The company is keen to supply as many as 22 variations of its platform to suit the needs of other makers who wish to build anything from autonomous delivery vans and SUVs to mainstream sedans and sports cars.

The new all-electric E-Flex chassis features four electric motors that deliver a combined 1,100 hp and a staggering 10,500 lb-ft of torque. Karma figures the combo could rocket a car from zero to 60 mph in 1.9 seconds. A large under-floor battery could deliver a cruising range of 400 miles per charge. 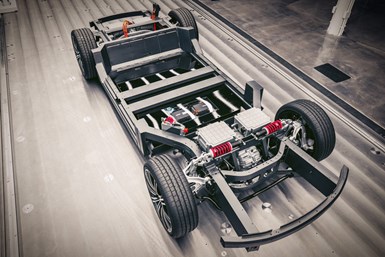 Karma’s original hybrid chassis debuted in the Revero plug-in hybrid sport sedan in 2017. That system comprises a 2.0-liter 4-cylinder engine and two electric motors that deliver 403 hp and the ability to travel 50 miles in electric-only mode.

It also adds a more powerful battery and replaces the original 4-cylinder engine with a turbocharged 1.5-liter, 3-cylinder unit supplied by BMW. The package boosts output to 536 hp and 550 lb-ft of torque and extends electric-only range to 80 miles.

Next Up: All Electric Sedan

Karma plans to tap its new fully electric platform for its first true EV sometime next year. The company said last week it will introduce an all-electric sedan, the Revero GTE, a year from now. Three variants will offer ranges of 200, 300 and 400 miles.

The GTE promises a zero-to-60 time under 3.9 seconds and a fast-charge system that can achieve 80% of capacity in less than 30 minutes.