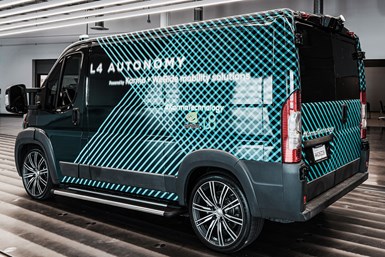 One of the initial models under development by the California startup is the E-Flex Van, which Karma unveiled this week. The electric delivery van features Level 4 autonomous driving capability and can be configured with multiple electric motors or as an extended-range series hybrid (using a small combustion engine and generator like the Chevrolet Volt).

Karma is teaming with Chinese autonomous vehicle startup WeRide.ai and chipmaker Nvidia on the E-Flex Van.

WeRide, which was formed in early 2017, will provide its autonomous vehicle operating system to support the van’s sensor suite (including cameras, radar and lidar). Founded in early 2017, the Chinese company is partially backed by the Renault-Nissan-Mitsubishi alliance. WeRide began testing its technology in Nissan Leaf robo taxis last year.

Karma didn’t provide any other technical details about E-Flex Van or say when it aimed to commercialize the platform.

But the company suggested several possible applications for the self-driving cargo van, such as supplying critical goods to underserved neighborhoods. It also could be modified to act as a first responder vehicle during natural disaster emergencies or public health crises such as the current coronavirus pandemic.

In addition to the delivery van, Karma has indicated the E-Flex platform could provide the basis for a pickup truck, SUV and a supercar.