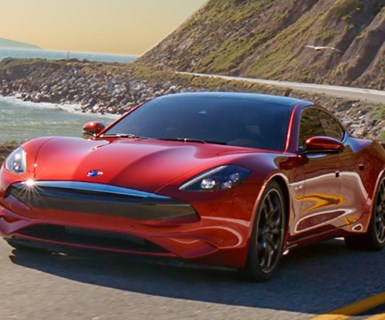 The series hybrid architecture uses a turbocharged 1.5-liter 3-cylinder engine sourced from BMW AG to power a pair of electric motors that drive the wheels. The combination generates 536-hp and 550 lb-ft of torque.

A new 28-kWh nickel-manganese cobalt battery replaces the 20-kWh lithium-iron phosphate unit used in the current Revero. Both types of batteries are supplied by Troy, Mich.-based A123 Systems, which like Karma, is owned by China’s Wanxiang Group Corp.

The Revero GT has a 360-mile driving range, including 80 miles in all-electric mode. The latter is more than twice the current model’s 33-mile electric range.

The GT retains the base design and aluminum structure of the original Revero, which was launched in the U.S. in 2017. But the updated GT features new sheetmetal, sleeker styling and other changes that save a combined 400 lbs, according to the carmaker.

Wanxiang bought the assets of Fisker Automotive about five years ago and renamed the company Karma Automotive. The Revero is based on Fisker’s short-lived Karma model that was discontinued when that company went bankrupt in 2014.