The 2020 model is powered by a BMW-sourced 1.5-liter 3-cylinder engine and two electric motors that are tuned to produce a combined 536 hp and 635 lb-ft of torque. 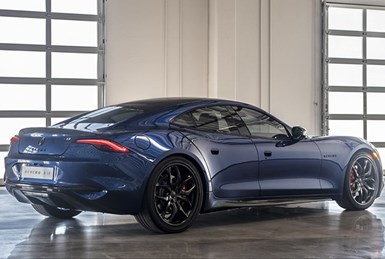 Zero to 60 mph acceleration is listed at 3.9 seconds, trimming more than half a second off the time of the redesigned Revero GT. Top speed is electronically limited to 130 mph.

A new single-speed gearbox is positioned between the twin motors and Karma’s internally developed inverters. The integrated design provides size, weight and performance benefits, according to the carmaker.

The car’s 28-kWh NMC (nickel-manganese-cobalt) lithium-ion battery provides an 80-mile range in electric-only mode—up 60% from the first-generation Revero. Combined range with the hybrid system is 360 miles.

Karma says it redesigned the Revero's brake calipers to reduce drag on the rotors and improve driving range. The car also gets new suspension bushings and valves and electrically assisted power steering to enhance driving dynamics. Other goodies include electronic torque vectoring and standard launch control.