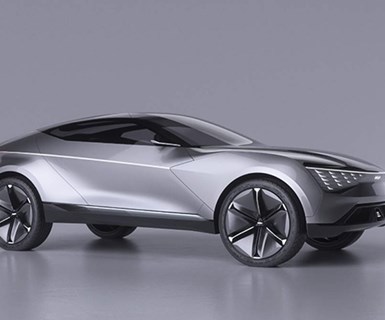 The vehicle previews the design of future Kia EVs and an updated version of the company’s signature “tiger nose” grille. The latter is wider than the current design and sports integrated LED headlights.

Noting the concept’s relatively large size and ample ground clearance, Kia refers to the Futuron as an SUV coupe. The vehicle rides on a 118-inch wheelbase, stands 66 inches tall and stretches to 191 inches from bumper to bumper.

Styling cues include oversized wheels and a distinct “dragon skin” body color that is designed to emulate the scaly armor of the mythical creatures. A panoramic, diamond-shape glass roof houses a lidar array, which Kia says could enable Level 4 autonomous driving. 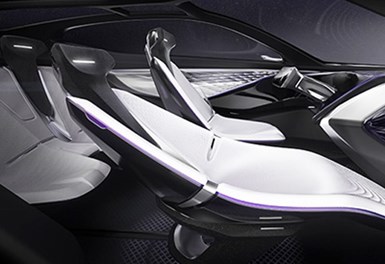 The interior is highlighted by a graphical user interface that flows out of the driver-side door and wraps around the steering wheel to merge the instrument cluster and center infotainment display. When the vehicle is operating in autonomous mode, the steering wheel retracts and the front seats can be fully reclined.

Power comes from in-wheel electric motors. The battery is housed in the floor.