The World Car of the Year awards ceremony, which was supposed to have taken place this week at the New York auto show, was canceled a month ago in the wake of the coronavirus.

While today’s subdued digital announcement lacks the glitz and glamour of a live event, it doesn’t diminish the accomplishment of the winning vehicles. Congratulations and a virtual round of applause also go to all the designers, engineers, manufacturing personnel and others, whose passion, creativity and hard work made it possible.

For those keeping score at home (where else would you be?), Kia and Porsche each notched two wins, with Mazda capturing the remaining trophy. The 2020 World Car Award winners are the:

The Telluride’s win is the latest in a string of awards for Kia, with 70 alone for the three-row crossover—including being crowned the 2020 North American Utility Vehicle of the Year.

World Car jurors praised the Telluride for its practicality, roominess and distinctive design. Kia designed the Telluride in the U.S. and produces the vehicle at its plant in West Point, Ga. 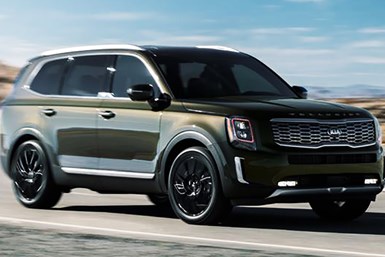 The Telluride edged two Mazda models—the CX-30 and Mazda3—to earn World Car honors. The three finalists were winnowed from an initial field of 29 vehicles by 86 automotive journalists from 24 countries.

This is the first World Car of the Year title in any category for a Kia model. Last year’s overall winner was the Jaguar I-Pace. A full list covering all categories since the awards were created in 2005 is available here.

The compact electric Soul beat seven contenders to be named World Urban Car. The two other finalists were the Mini Electric and Volkswagen T-Cross.

Available with a 64-kWh battery, the Soul has an estimated driving range of 452 km (289 miles) on the WLTP cycle.

On the luxury side, the other finalists were its 911 sports car sibling and the all-new Mercedes-Benz EQC electric crossover. The two other performance car finalists also are Porsche’s handiwork: the 911 and 718 Spyder/Cayman GT4 racers.

All contenders for the other World Car categories also were assessed for the World Car Design category. A separate 7-member design panel evaluated these vehicles to create a short-list of semifinalists for the full jury. This year’s winner, the Mazda3, outscored the Taycan and the Peugeot 208 small car.

The Mazda3 also won car of the year titles in China and Thailand.