That’s about to change. In a big way.

By 2025 the company expects EVs to account for 20% of its sales volume in North America. Similar penetration rates are forecasted for Europe and South Korea. 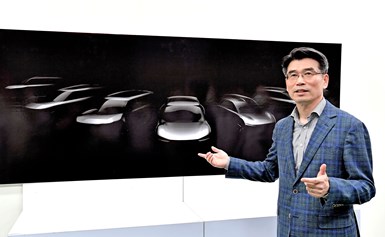 On a global basis, one in four Kia deliveries are due to come from EVs by the end of the decade.

The rollout will start next year with a new crossover vehicle. Codenamed CV, the model will be built on Kia’s new Electric-Global Modular Platform (E-GMP).

As its name suggests, E-GMP is designed specifically for electrified vehicles and will be capable of carrying a wide variety of body styles. The purpose-built architecture also will enable best-in-class interior space for the new EVs in the respective segments, the carmaker claims.

By comparison, the current Soul EV is a modified version of its traditionally powered namesake. Kia introduced the electric variant of the redesigned crossover last year in Europe but has delayed the U.S. rollout until at least 2021 due to supplier shortages of electrified components. The previous generation Soul and Soul EV were phased out in 2018.

The upcoming CV is part of the “Plan S” strategy that Kia outlined in January.

Under the scheme, Kia will expand its EV lineup to 11 models—including those derived from ICE architectures—by 2025.

The updated plan announced this week calls for seven dedicated E-GMP models by 2027. This will include a range of mass-market vehicles as well as city cars and performance models.

In Korea, Kia is partnering with its dealer network to add charging stations and EV services bays. The company expects to have 1,500 chargers and 1,200 bays in its home market by 2030. Kia also is developing EV-specific training programs for service technicians.

Additionally, Kia plans to open 600 EV work bays in other markets through the end of 2020, with another 2,000 planned in the next two years. The company also is developing EV training programs for service technicians.

In Europe, the carmaker aims to install more than 2,400 EV chargers at dealer facilities in coming years. Another 500 are planned in North America.