The so-called “Plan S” spending spree is designed to position the brand as a leader in emerging technologies—with clear financial rewards. By 2026, the investment is expected to yield a:

Interestingly, the market share projection excludes China, which is the global leader (by far) in EVs.

Kia plans to launch 11 EVs by 2025, at which time its annual sales of such models are expected to top 500,000 units. Another 500,000 in sales are earmarked for other “eco-friendly” vehicles (presumably hybrids and fuel cell-powered cars), combining for 1 million green machines that are expected to account for 25% of Kia’s overall volume. 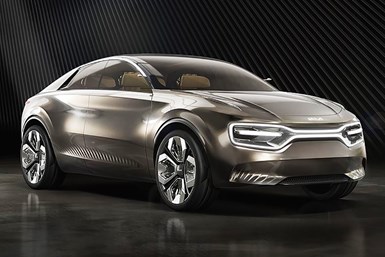 The EV rollout will start in 2021 with an all-new model built on a dedicated platform—i.e., a skateboard chassis with the battery packaged in the floor. A crossover body style, possibly based on last year’s Imagine concept, is expected.

Other EVs with differentiated pricing and unique features will be added in developed markets in the coming years. This will be followed by selective introduction in emerging markets.

Kia also plans to create “mobility hubs” in large global cities. Such centers will include a charging and maintenance infrastructure for EVs, provide a base for car-sharing and e-commerce, and support future fleets of autonomous taxis and shuttles. 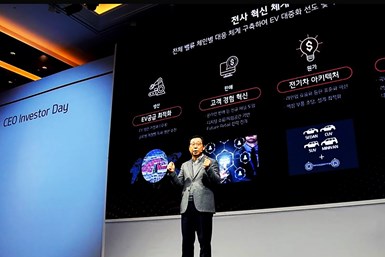 There also are big plans for “purpose-built” vehicles, or PBVs. Such models will be customized for corporate clients, including fleets for transport, logistics and distribution companies. Kia says industrywide PBV sales (fueled by robo-taxis and e-commerce) could grow to 25% of the global market by 2030, compared with less than 5% today.

The company’s transition will include innovations that will evolve its brand identity, design strategy and user experience. More details about this will be announced in the second half of this year.

If this sounds familiar, it should. Kia’s Plan S is part of the $86 billion program announced earlier this year by Hyundai Group. In addition to Kia, the larger investment covers the group’s Hyundai and Genesis brands as well as commercial trucks and other transportation-related ventures.

By 2025 the group aims to nearly double its lineup of electrified vehicles to 44 models, including 23 EVs. Also in the works: air taxis, car-sharing services, short-term vehicle subscription plans and smart city technologies.

Kia CEO Han-woo Park describes the process as a radical transformation sparked by “turbulent changes” within the industry and society overall. His vision calls for Kia to become a “ceaselessly innovative brand.”