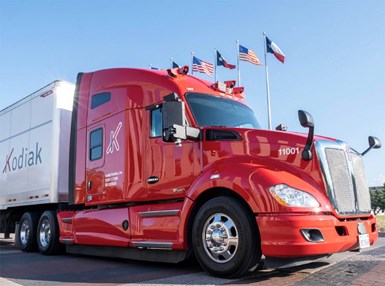 The 16-month-old company says its heavy-duty trucks with backup safety drivers on board are designed to provide “middle mile” transport exclusively along highway routes.

Kodiak has been testing its own software with an array of truck-based self-driving hardware that includes radar, lidar and cameras. Evaluations until recently have been conducted on test tracks and public roads in California. The company says further testing will be based in Texas.

Kodiak says its philosophy is to develop its system under “the most difficult miles” to maximize learning and vehicle use while minimizing cost and risk.