More than 130 units have been deployed to date, and there are plans to add about 150 each year for the foreseeable future. Several European cities also are using streetlights as a base for chargers. 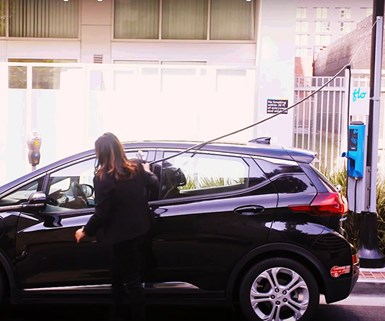 The strategy is expected to benefit apartment dwellers who may not have the ability to charge an EV overnight at home. Starting in January, all new multi-unit dwellings in Los Angeles will be required to have chargers accessible for 10% of available parking spaces.

The L.A. chargers are operated by networks such as EVGo, Flo, ChargePoint and GreenLots. Charging fees are based on demand, but typically are less than $2 an hour. In addition to the industry partners, the program is backed by the California Air Resources Board and California Energy Commission.

L.A. has more than 222,000 streetlights throughout the city. In recent years the lights have been converted to LED fixtures, which officials say makes it easier to integrate charging units.

Watch a video about the program HERE.