Automobili Lamborghini is helping out its local hospital by converting part of its manufacturing operations in Sant’Agata Bolognese to protective equipment production.

The people who are ordinarily employed in what is called “the saddlery,” given the leather-intensive interiors of Lambos, are now sewing 1,000 surgical masks per day. 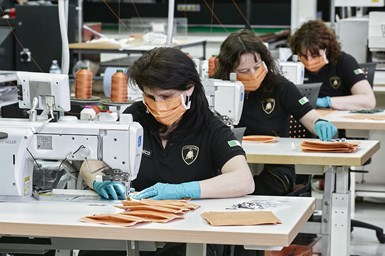 Under ordinary circumstances they make some of the most sumptuous interiors in the world. Now they’re making protective masks for the local hospital. (Images: Automobili Lamborghini)

And the personnel in the carbon fiber production plant and the Research and Development department are producing 200 plexiglass shields per day that are being donated to the Sant’Orsola-Malpighi Hospital in Bologna.

To assure that the gear meets requirements, the work is being conducted in collaboration with the University of Bologna; the Department of Medical and Surgical Sciences is overseeing validation testing. 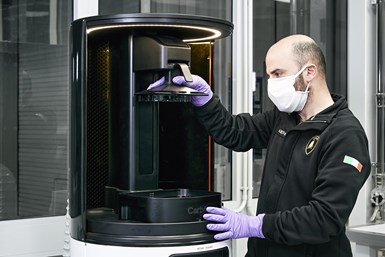 3D printing equipment is being used by Lamborghini for protective mask production.

In words that have been spoken by many automotive OEMs around the world though with different refences but the same commitment, Stefano Domenicali, Chairman and CEO of Automobili Lamborghini, said, “During this emergency, we feel the need to make a concrete contribution. The S. Orsola-Malpighi Hospital is an institution with which we have had a collaborative relationship for years, through both professional consultancy in promoting programs to protect our workers’ health, and in research projects. We will win this battle together by working in union, supporting those who are at the forefront of fighting this pandemic every day.”