Lamborghini SpA and researchers at the Massachusetts Institute of Technology have filed a patent for a new material that promises to significantly improve the performance of supercapacitors.

Lamborghini SpA and researchers at the Massachusetts Institute of Technology have filed a patent for a new material that promises to significantly improve the energy density and efficiency of supercapacitors. 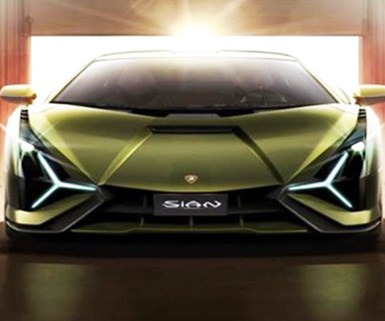 The two groups have been working together for three years under the MIT-Italy initiative. That program led to Lamborghini’s 2017 Terzo Millennio concept car and the upcoming Sian hypercar (right), which teams a 48-volt mild-hybrid architecture with a supercapacitor instead of a lithium-ion battery.

The supercapacitor material is based on a metal-organic framework (MOF) technology. Led by chemistry professor Mircea Dinca, MIT synthesized the material to improve its conductivity and other properties.

The resulting molecular structure maximizes surface area to make the material well suited for producing electrodes for high-performance supercapacitors, according to the partners. Further research will focus on optimizing the properties of the material and developing volume production processes.

The Sian, which was unveiled at the Frankfurt auto show in September, teams a 6.5-liter V-12 engine and a small electric motor that generate a combined 819 hp—the most ever for a Lambo. The car’s supercapacitor weighs one-third as much as a battery with the same capacity.

In addition to boosting output, the supercapacitor and electric motor can directly power the vehicle during low-speed maneuvers. Lamborghini claims this is an industry first for a mild-hybrid system.