The future of self-driving vehicles is starting to take shape, and it’s increasingly looking like it will be in the form of a boxy, utilitarian city transporter.

The latest concept to foreshadow such applications is Jaguar Land Rover’s Vector, which was unveiled on Tuesday. No technical details were provided, but JLR describes the vehicle as an “autonomy-ready” living laboratory. 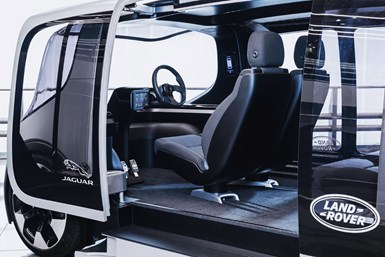 The cube-like modular design is reminiscent of Toyota’s e-Palette and other recent concepts. Riding on a skateboard chassis, the all-electric vehicle measures just 157 inches from front to rear.

JLR says the Vector’s body and interior can be easily reconfigured for a variety of private and shared use applications, including first-mile/last-mile transportation and deliveries in congested cities.

JLR has been developing the vehicle in secret over the last two years in conjunction with Warwick University’s National Automotive Innovation Center. Tim Leverton, who rejoined JLR last year after stints with Tata, JCB and Rolls-Royce, is leading the program.

The initiative is being treated as a separate startup venture. This includes quick decision-making and collaborating with suppliers and researchers. Outsider investors also may be brought in.

For now, the near-term plans call for an unspecified pilot program to start next year in Coventry, England.