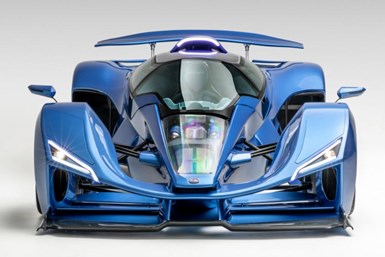 Delage, a storied brand in automotive history, is set to make a comeback with a new 1,000-hp-plus hybrid hypercar…68 years after the French nameplate was last in production.

The rebooted Delage Automotive aims to produce 30 of the new D12 models, which are expected to start at more than $2.3 million. Customer deliveries are due some time next year.

Teaming a 7.6-liter naturally aspirated V-12 engine with a small electric motor and 8-speed transmission, the powertrain will generate a combined 1,115 hp and propel the D12 from zero to 100 kph in 2.5 seconds on its way to an estimated top speed of 233 mph, according to the carmaker. 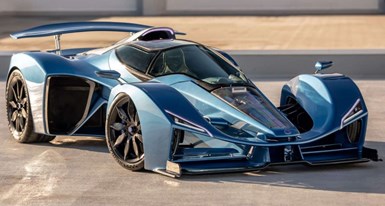 A carbon fiber construction keeps the GT variant’s weight at just under 3,100 lbs. A track-focused Club model cuts about 200 lbs, thanks to a smaller electric motor (used mainly for reversing and parking maneuvers). The configuration reduces output to 1,010 hp but should yield faster track times, according to Delage, which is targeting a new record at Germany’s famed Nurburgring Nordschleife circuit.

Other goodies include a Formula One-inspired pushrod suspension and a carbon fiber steering wheel and seats customized to fit the car’s owner. Former F1 Champ Jacques Villeneuve served as a test driver to help develop the chassis and associated ride and handling characteristics.

Founded in 1905 by Louis Delage, the French marque enjoyed early success in motorsports. Delage took the checkered flag at the Indianapolis 500 in 1914, then went on to dominate Grand Prix racing in the mid-1920s with its innovative 2.0-liter V-12 models.

The carmaker set the land speed record at 143 mph in 1924 and was named World Champion of Car Builders in 1927.

In the 1930s, Delage became known for its high-end luxury models. But financial problems exacerbated by the aftereffects of World War II forced the end of production in 1953. At that time, Delage and its sister brand, Delahaye, were absorbed by Hotchkiss.

French entrepreneur Laurent Tapie licensed the rights to the brand last year and formed the new Delage Automotive. He already is envisioning a second model that promises to make use of a “revolutionary” turbine power system and innovative aerodynamic technology.