“Changing tastes and production techniques made it difficult to maintain sufficient manufacturing quantities. There was no longer room in the market for a small production, highly personalized luxury automobile.”

That’s the stated reason on Ford’s website for killing the Lincoln Continental… when the first-generation model was axed in 1948.

As they say, history tends to repeat itself. On Wednesday, Lincoln confirmed that it’s dropping the latest rendition of the iconic nameplate from its U.S. lineup at the end of the year.

This time around, changing tastes applies to the ongoing industrywide shift from traditional cars to SUV/crossover vehicles and pickup trucks. Such models also yield much higher margins for carmakers. 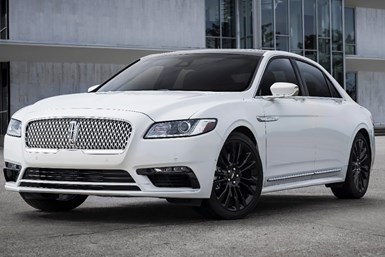 In January, Lincoln announced it will discontinue its other remaining car, the midsize MKZ, at the end of the year (leaving it with the Aviator, Corsair, Navigator and Nautilus crossover models). The luxury marque is following the lead of Ford’s namesake brand, which began its car purge two years ago.

Cars accounted for less than 22% of Lincoln’s U.S. sales in 2019, with the combined volume of the Continental and MKZ shrinking 15%. At the same time, the brand’s SUV/crossover lineup climbed 17% year-over-year.

In announcing the Continental’s demise, Lincoln reinforced where its future lies. "Lincoln is investing in growth segments, and the brand will feature a full portfolio of SUVs, including a fully-electric vehicle in the future," the company said in a statement.

The Continental’s history dates back to the 1930s. Development of the car was championed by Henry Ford's son, Edsel, who headed the Lincoln division at the time. He wanted to create a car that matched the elegance of the top European models of the time.

Working with designer Bob Gregorie, who previously had specialized in luxury yachts, Ford spearheaded a team that adapted the existing Lincoln Zephyr into the 1939 Zephyr Continental (the Zephyr named was dropped two years later).

The car was an instant classic, with sales of the first-generation model (later designated Mark I) topping 5,300 units. In 1946, it was displayed at New York’s Museum of Modern Art as one of eight cars epitomizing design excellence. Renowned architect Frank Lloyd Wright hailed it as “the most beautiful car in the world.”

But after World War II, the market for “personal luxury” cars dwindled in favor of larger sports cars and so-called grand touring models. Lincoln concluded it would have to redesign the Continental from scratch to continue the nameplate, a proposition the company ultimately reasoned was too expensive to do (sound familiar?) and opted to drop the car for the first time.

The nameplate was resurrected in 1955 with the Continental Mark II, which spurred the creation of Ford’s short-lived Continental Division from 1956 to 1957.

Six more generations of the vehicle were produced over the next five decades until Lincoln pulled the plug on the Continental again after the 2002 model year.

Ford introduced the current 10th-generation Continental in late 2016. Although it was based on a well-received concept car and ushered in Lincoln’s new design language, the new model debuted to lukewarm reviews—the interior was panned—and never lived up to expectations.

Lincoln plans to continue sales of the Continental in China through 2021. But that will be the end of the road for the current edition of the historic model. After that, the company says it will “return the name to the vault.”