This includes last-mile/first-mile services to help workers, students and others bridge multiple modes of transportation for the final leg of their journey. That’s the idea behind a new partnership between Local Motors and Beep, a Florida-based mobility service operator. 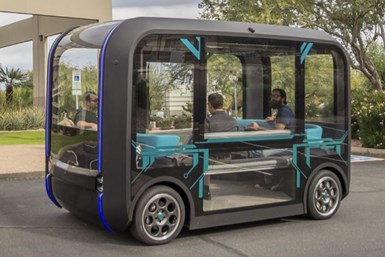 The companies expect to deploy hundreds of the vehicles in Canada and the U.S. in coming years, starting with the first application early next month at an unspecified location. Local Motors’ 3D-printed, electric shuttles use Clarksburg, Md.-based Robotic Research’s autonomous vehicle technology.

Both companies already operate their own pilot programs.

Local Motors, which has been testing its vehicles for several years, currently operates Ollie at five universities, business parks and other campus settings in the U.S., Italy and Saudi Arabia.

At the same time, the company continues to make progress with its 3D printing technology. In the past five years, Local Motors has gone from producing 30% of the body of the first-generation Olli via additive manufacturing to 70% with Olli 2.0. Part counts and manual production hours were both cut in half, according to the company.

Beep has formed partnerships with several transit agencies and private development groups in Florida, including an initiative to transport COVID-10 supplies at the Mayo Clinic in Jacksonville. Beep also runs an autonomous shuttle service in Peoria, Az. These programs use electric shuttles supplied by France’s Navya Technologies.

The companies plan to bid on projects to "fill the gaps in existing transportation networks where other mobility providers have found it harder to move forward in the past," Beep CEO Joe Moye says.

Local Motors and Beep also are members of the National Highway Traffic Safety Administration’s AV TEST initiative announced last month. The new agreement will allow the companies to push for legislation to allow more vehicles without a federal classification to operate on public roads in the U.S. and Canada, according to Moye.

But both companies realize progress will take time. One mile at a time.