The phrase an “abundance of caution” has become common these days to describe how people and organizations are taking extra measures to protect themselves and help prevent the spread of the coronavirus through social distancing and self-quarantines. 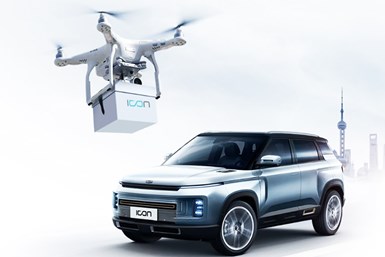 China’s Geely Auto is taking the lead in applying the concept to new car purchases. Its latest initiative allows customers to take delivery of their vehicle’s keys via a drone.

That’s right, a small remote-controlled aircraft drops off the keys to wherever the customer chooses. Deliveries can be made to their front porch, an apartment balcony or directly to the buyer (assuming they’re outside) as shown in this animated video.

Here’s how it works. Customers complete the ordering process entirely online, from specifying options to credit approval and financing.

Local dealers prep the vehicle—including disinfecting it—and deliver it directly to a buyer’s house, workplace or wherever is convenient. Tesla and several other carmakers already offer such amenities.

Here’s where Geely differs. The delivery team uses a remote-controlled drone to drop off the keys, which are packaged in a small pouch. After collecting the drone, they drive a separate vehicle back to the dealership, leaving the buyer alone with the keys and their new ride.

Geely calls it a “contactless” delivery option. The service currently is limited to select areas in Wuhan, where the coronavirus outbreak began in December.

Do Customers Want It?

It’s too early to tell if delivering keys by drone is too much cautionary abundance. But the rest of Geely’s contactless process is off to a good start. The carmaker says it has received more than 10,000 online orders since launching the program last month in conjunction with the new Icon crossover vehicle.

Another 110,000 people have expressed an interest in making a purchase this way in the coming months, according to the carmaker. Such leads are sent to local dealers to follow-up on.

A month ago, delivering car keys by a drone would have been viewed as a pure marketing gimmick, and still seems like overkill. But companies now are willing to try anything to revive sales. Last month, China’s new car sales plummeted 80% from 2019 levels. Italy, which has become the new epicenter for the pandemic, is on a similar pace this month.