Look Up in the Sky, it’s a Toyota!

Toyota’s future mobility plans are up in the air. Literally.

This week the carmaker’s SkyDrive affiliate demonstrated a flying car.

Separately, Toyota announced the name of the vehicle it’s developing to drive on the moon for an international space mission planned for late this decade.

The single-seat SD-03 prototype circled the carmaker’s Toyota City test field for about four minutes during the tests, which are said to be the first such demonstrations in Japan. SkyDrive, which was formed in 2012 by a group of Toyota employees (Toyota invested $350,000 in the company in 2017), aims to get approval for testing outside of the proving grounds by year-end. 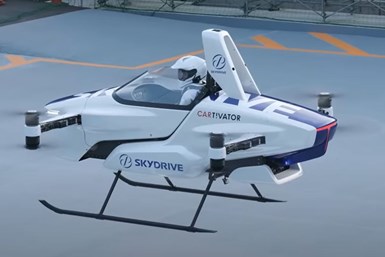 Similar to other flying cars under development, the SD-03 is a vertical take-off and landing (VTOL) device. Measuring about 157 inches long, 79 inches tall and 157 inches wide, the SkyDrive prototype is said to be the world’s smallest VTOL.

The aircraft features eight rotors—two at each corner with each set driven by its own electric motor. SkyDrive says the setup will allow the SD-03 to continue to fly if one of the motors fails.

SkyDrive aims to launch a commercial air taxi service with a two-seat variant of the vehicle within three years. By that time, the company expects the aircraft to be capable of fully autonomous operations.

Playing off the name of its rugged Land Cruiser SUV, Toyota has named its moon off-roader the Lunar Cruiser. 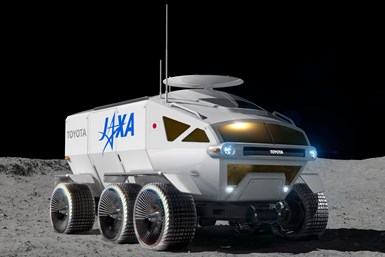 The carmaker announced plans for the vehicle, which it is developing with the Japan Aerospace Exploration Agency, in March 2019.

The six-wheeler will have an enclosed, pressurized cabin than is designed to carry as many as four astronauts. It’s powered by an electric fuel cell that can provide a driving range of 1,000 km (621 miles) on full tanks of hydrogen. 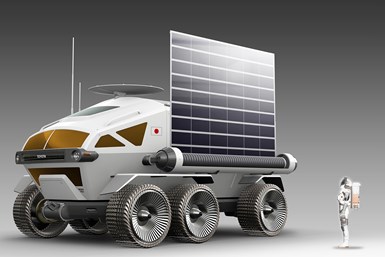 Retractable solar panels would help generate electricity for onboard use.

Over the next year, Toyota plans to test power and heat radiation performance using virtual reality tools and full-size mock-ups of the Lunar Cruiser. Manufacturing and drivability tests also are planned for the oversize tires.