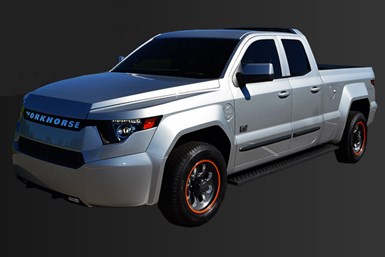 The first buyers of Lordstown Motors’ upcoming Endurance electric pickup will have to wait at least a month longer than previously planned to take delivery of the rugged work truck.

The startup, which purchased General Motors’ former Lordstown, Ohio, assembly plant last November, says the planned introduction of the vehicle is being delayed from late this year to January 2021.

“Like most companies, the pandemic has caused us to tweak our plans. However, it has also dramatically strengthened our conviction and enthusiasm to bring the Endurance to market as soon as humanly possible,” CEO Steve Burns wrote on Lordstown’s website.

Aside from a skeleton maintenance staff, Lordstown’s Ohio factory has been shuttered since mid-March. However, Burns says, design engineers have been working at home to continue to test and fine-tune the Endurance’s technology.

Production workers aren’t due to be hired until later this year.

Lordstown had planned to take the wraps off a near-production version of the electric truck in June at the Detroit auto show, which has since been canceled.

The company still is targeting an early summer unveiling. But it likely will be a “virtual reveal” from the Lordstown complex, which also serves as the carmaker’s headquarters.

Burns says the company’s efforts to raise $400 million in funding are on track.

Lordstown is targeting the light-duty commercial vehicle market with the Endurance.

The Endurance, which is based on struggling affiliate Workhorse Group’s W-15 truck, will feature four electric motors that generate a combined 600 hp. The design is one of the first uses of motors located within a vehicle’s wheel hubs.

Driving range is targeted at about 250 miles per charge. The selection of the battery supplier, however, hasn’t been finalized.

Lordstown aims to produce 20,000 electric pickup trucks in 2021 and triple that volume the next year. It expects to use about 30% of the 6.2 million-sq-ft factory and initially employ about 400 production workers.

GM had built as many as 400,000-plus vehicles at the 53-year-old plant. When the last Chevrolet Cruze rolled off the line more than a year ago, some 1,400 people worked at the facility.

Lordstown says it has received letters of intent from customers across the country to purchase the $52,000 electric truck. This includes an order earlier this month from Florida-based Innervations, which plans to buy 1,000 of the EVs for fleet buyers.