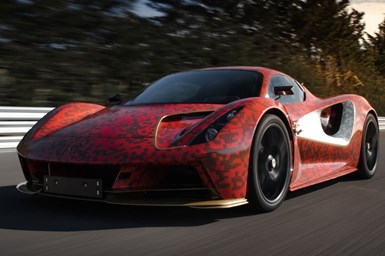 But that’s only about half as good as it gets. If drivers really want to let loose, they can switch to Tour or Sport mode.

Want more? Try kicking it up another notch—way up—to the ultimate Track mode, which delivers on Evija’s claims of being the world’s most powerful production car…providing nearly 2,000 hp.

Lotus demonstrated all five modes in a new teaser video featuring Gavan Kershaw, director of vehicle attributes, behind the wheel of a prototype Evija on the company’s test track at its headquarters complex in Hethel, England.

Here’s how Lotus describes the progressive power deployment of the five modes.

Powered by four electric motors, the car can sprint from zero to 62 mph in less than three seconds and hit 186 mph in under nine seconds. Top speed is listed at more than 200 mph.

The new video also provides a peek inside the Evija and showcases the car’s 70-kWh battery. The latter is housed in a see-through compartment directly behind the seats to help optimize weight distribution. 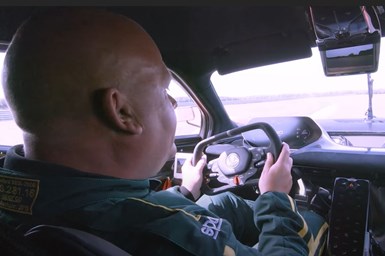 Gavan Kershaw takes the Evija for a spin.

Codenamed the Type 130, the new EV measures 181 inches long, 79 inches wide and 44 inches tall. The use of a carbon fiber monocoque chassis keeps weight down to about 3,700 lbs.

The Evija’s introduction has been postponed about five months, from late this year until next spring, due to the coronavirus pandemic.

Production of the hand-built model will be limited to 130 units. Pricing starts at about $2.6 million.