Lucid Air Lives Up to Its Name

It’s no secret that aerodynamics is a key priority for electric vehicle startup Lucid Motors. 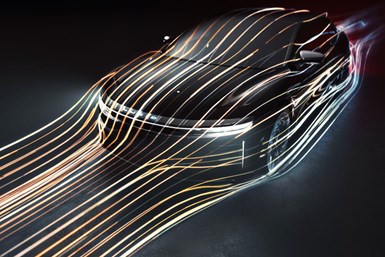 Lucid Air has a coefficeint of drag of 0.21. (Image: Lucid Motors)

After all, the name of its first model is “Air.”

But if there’s any doubt about exactly how important the technology is to the company, consider this: One of Lucid’s top executives’ job title is Lead Aerodynamicist.

His name is Jean-Charles Monnet, and here’s what he has to say about the upcoming Air: “We applied lessons learned from shaping the world’s highest performance racing machines as integral to the Lucid Air’s design process. It’s not just about achieving the lowest coefficient of drag, it’s also key to have a highly balanced performance vehicle with precisely managed airflow in all aspects.”

The result? Lucid claims it has achieved a new aerodynamics benchmark with the Air, which the company says has verified a coefficient of drag of 0.21.

Currently, Mercedes-Benz latest A-Class sedan and CLA coupe are said to be the most aerodynamic production vehicles with a 0.22 Cd. Tesla’s Model 3 small sedan is rated at 0.23.

Lucid tested the Air at Windshear’s facility in Concord, N.C. The wind tunnel features a closed-air, temperature-controlled environment with a “rolling road” that can simulate vehicle speeds as high 180 mph with air circulated at 47,500 cu ft per second.

Monnet’s team worked with their design and engineering counterparts at Lucid throughout the development process to optimize the Air’s aerodynamics. The intent was to put as much effort into this area as typically is spent on an electric powertrain. 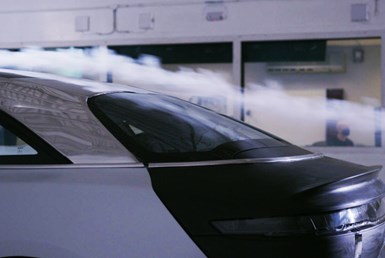 Lucid says the car includes several special features to guide airflow and minimize resistance. Among them is a patented “vortex-generating” intake system behind the front bumper, which Lucid says maximizes cooling by uniformly distributing air on heat exchange surfaces while minimizing the size of the air intake aperture.

The Air’s “Space Concept” layout, which features a very low front, acts as a cD multiplier that further improves efficiency, according to the carmaker.

Improved aerodynamics can help boost an EV’s range and/or reduce the size of the battery, Lucid notes.

The Air is expected to have an EPA-range of more than 400 miles when the car is introduced later this year. It also has a top speed of 235 mph.

Such a combination would put the Air in class with Tesla’s Model S sedan. Of course, that vehicle already is on the road.

Lucid plans to unveil the production version of the Air in September. The company is constructing a new factory in Arizona to assemble the slick sedan.

But as Byton and other startups can attest, nothing is certain until deliveries start.