Silicon Valley-based electric vehicle startup Lucid Motors had planned to unveil the production version of its first model, the high-powered Air sedan, last month at the New York auto show. That didn’t happen (for obvious reasons unrelated to the car).

Stay-at-home restrictions aimed at preventing the spread of the coronavirus also have put Lucid’s validation testing on hold.

But the company still aims to complete all testing, unveil the car and launch production at a new plant in Casa Grande, Ariz., by the end of the year.

To date, Lucid has built some 40 beta prototypes of the Air. Dozens more are said to be in the works. 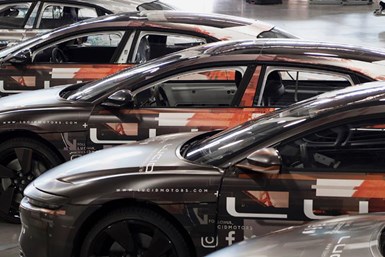 Each vehicle will have a specific purpose in Lucid’s validation program.

Winter runs in Minnesota already had been completed prior to the shutdown. Beta cars also had been driving between Los Angeles and San Francisco on a single charge to showcase the Air’s estimated 400-mile-plus range, which is about the same distance it takes to complete the trip along the California coastline.

Further road and track testing are planned once lockdown restrictions are lifted. For now, the prototypes are stored at Lucid’s headquarters in Newark, Calif.

Lucid says the prototypes are camouflaged in four distinctive wraps, which it invites viewers of the teaser video (above) to identify.

About the Car: Airing on the Side of Performance

Lucid claims the sleek EV can sprint from zero to 60 mph in less than 2.5 seconds on its way to a top speed of more than 200 mph. 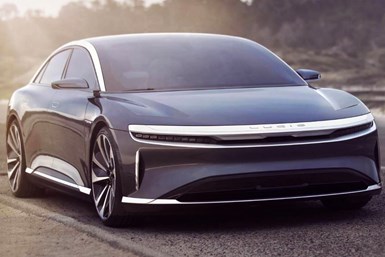 LG Chem will supply the car’s 900-volt battery. Lucid says the system will set a new standard in EV efficiency (as much as 5 miles of range per kWh) for a full-size luxury sedan.

Other highlights include an air suspension, voice recognition technology and over-the-air software updates. The latter will be used to add increasing levels of autonomy, according to the carmaker.