Got a minute? Add 20 miles of range.
#LucidMotors #Volkswagen #Tesla

Last week Lucid Motors boasted that its upcoming Air electric sedan will have an estimated driving range of 517 miles.

This week the Newark, Calif.-based startup says owners will be able to charge the car’s battery at rates as great as 20 miles per minute, adding as much as 300 miles of driving range in 20 minutes of charging time.

These announcements, along with several others in recent months, are part of a well-coordinated teaser campaign in the run-up to the formal unveiling of the Air scheduled for Sept. 9.

The fast-charging capability is made possible in large part to the Air’s 900-volt electrical architecture (another industry first). This would outgun the Porsche Taycan’s 800-volt system, which is twice the capacity of most EVs. 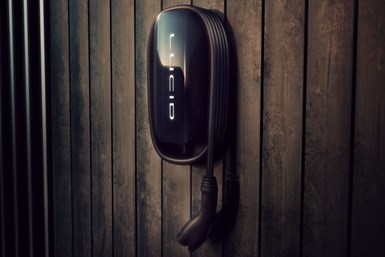 Lucid also credits the Air’s customized lithium-ion battery cells, a sophisticated battery and thermal management system, and the design of the overall electric powertrain. The carmaker adds that its "Wunderbox" onboard charging unit combines several components into a more efficient integrated unit.

“We have significantly increased the speed of energy getting into, around, and even out of the vehicle, delivering the world's fastest-charging EV packed with future-ready charging features," says Eric Bach, Lucid’s vice president of hardware engineering.

The 20-mile-per-minute rate would be achieved through a 350-kW DC ultra-fast charger. The Wunderbox, which also is compatible with lower output chargers, automatically boosts its voltage when needed to charge at the quickest possible rate at any location, according to Lucid.

In addition to DC charging, the Air will be equipped with a 19.2-kW AC onboard charger that can support charging rates of 80 miles per hour.

Lucid also has announced a partnership with Volkswagen’s Electrify America unit that will allow owners of the pricey luxury EV (which is expected to start in the $150,000 range) to charge their cars for free at the company’s network of public charging stations for the first three years of ownership. The agreement will include an app that helps drivers locate and navigate to open charging ports.

The scheme is similar to Tesla’s initial approach to charging, which initially was free to customers at the EV pioneer’s Supercharger stations. Tesla began phasing out the complementary service in 2016 as its sales grew.

Electrify America, which was created as part of VW’s settlement of federal charges that it rigged diesel engines to trick U.S. emission tests, operates more than 2,000 chargers across the country. The company plans to have 800 stations with a combined 3,500 chargers—including a mix of 150-kW and 350-kW units—by the end of 2021.

The system will be one of the first with bi-directional charging, according to the carmaker. Such capability will allow owners to use the Air as a temporary energy reserve to power their homes, including properties not connected to an electrical grid.

Lucid also plans to enable vehicle-to-grid and even vehicle-to-vehicle charging capabilities in the future.

Pricing for the home charger and related installation costs will be announced later. Lucid is partnering on the program with Qmerit, which will coordinate the installation process.