The Newark, Calif.-based startup says the new sedan, which will be formally unveiled on Sept. 9, has been independently tested to cover 517 miles on a single battery charge. 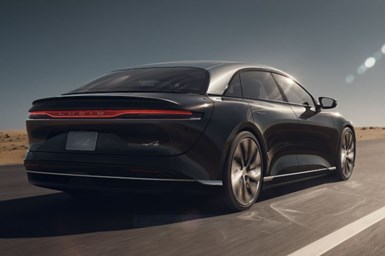 This will make the Air the EV distance champ. By far. Tesla currently holds the title with an official EPA rating of 402 miles for the long-range variant of its Model S sedan. Most other EVs are in the 200- to 300-mile range.

Lucid attributes the long-range capability to optimizing the design and performance of several components, starting with the battery. 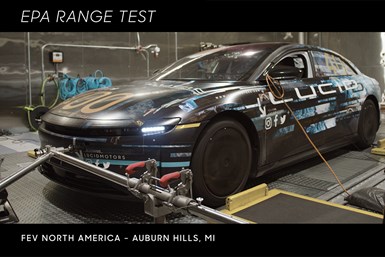 The carmaker’s Altieva unit is the exclusive battery supplier to the Formula E electric car racing series. Altieva, which was Lucid’s original name until the new moniker was adopted in 2016, has been refining the chemistry for 10 years and now is partnering with LG Chem on the technology.

Other contributing factors cited for the Air’s 500-mile range include:

Lucid also says improvements have been made to the Air’s chassis, thermal system, software and overall system efficiency.

How Far Will It Go?

To put the 517-mile range in perspective, it’s only about 350 miles from Lucid’s headquarters near San Francisco to Los Angeles. The Air easily topped that with its original targeted range of 400 miles, which the car surpassed in real-world testing last year.

Starting from the carmaker’s assembly plant in Casa Grande, Az., a fully charged Air could drive all the way to Chihuahua, Mexico—with a few miles to spare. Or you could take a road trip from Detroit to Chicago, then nearly all the way back (with a pit stop in Ann Arbor) before having to plug in again.