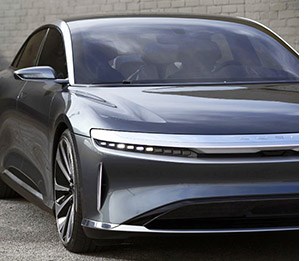 Lucid says the ADAS array initially will enable Level 2 automation, meaning the ability to robotically steer, brake and accelerate under certain conditions— with constant driver monitoring—along with a long list of safety features.

The company is developing Level 3 capability that can be loaded into the car wirelessly. The upgrade will add other automated driving functions such as lane changing and passing slower traffic. The Level 3 system will continue to assume the driver is available to intervene if asked.

Lucid says DreamDrive’s architecture is the first to be built around a high-speed ethernet ring. The design enables redundancy for the sensors themselves and their ability to provide safely automated driving functions, according to the company.

The big-deal component in Lucid’s system is its front-facing, long-range, high-resolution lidar. The technology is a centerpiece in all advanced autonomous driving systems. But to date, it hasn’t been offered as standard equipment in a production car.

Among the initial 19 safety and convenience features Lucid says will be included in DreamDrive are:

Lucid worked on DreamDrive with such suppliers as Bosch, Continental and HERE but says integrated the system entirely in-house.

The company plans to begin production of the Air at the $300 million factory it is completing in Casa Grande, Ariz.

The car, considered a direct competitor for the Tesla Model S, is expected to have a range of about 400 miles per charge, the ability to zoom from zero to 60 mph in less than 2.5 seconds and a top speed somewhere north of 200 mph.

Lucid says it will disclose product details and final pricing for the Air when it presents a production version of the car online on Sept. 9.