Lucid Dream: To Air Is Electrifying

Base model to start at under $80,000; New Crossover Teased
#tech

After several months of teasing out information, Lucid Motors unveiled the production version of its Air luxury sedan on Wednesday. 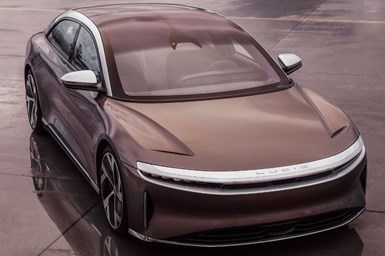 “We have created a halo car for the entire industry, one which shows the advancements that are possible by pushing the boundaries of EV technology and performance to new levels,” boasts CEO Peter Rawlinson.

He should know. Before joining Lucid in 2013 as the company’s chief technology officer (a title he still retains), Rawlinson was the chief engineer of the Model S. He previously worked at Jaguar and Lotus.

Four variants of the Air will be available:

All four iterations qualify for a $7,500 federal tax credit in the U.S.

What’s the difference between the models? In addition to more amenities and some unique styling cues, the higher-end Airs are more powerful and/or more efficient.

Equipped with a single electric motor, the Air Touring generates 620 hp and has an estimated EPA driving range of 406 miles. Specifications for the entry-level model will be released later.

The Grand Touring variant is fitted with two motors and a 113-kWh battery that ups its performance to 800 hp and 517 miles.

The top-end Dream Edition gets the same setup as the GT but is tuned to kick out 1,080 hp. It can sprint from zero to 60 mph in less than 2.5 seconds and can pass a quarter mile in less than 10 seconds, which Lucid claims is a world best for an EV. But the increased power reins in range slightly to 503 miles.

A three-motor performance model also is said to be in the works.

The Air’s purpose-built platform is designed to optimize packaging flexibility and interior space, which Lucid attributes in part to the use of smaller electric motors and other components. Lucid developed the entire electric drivetrain system itself.

The result? While its overall footprint is only slightly larger than a BMW 5 Series or Mercedes E-Class, the Air has the interior volume of a full-size 7 Series or S-Class sedan, according to Lucid.

At the same time, the Air boasts best-in-class cargo capacity of 26.1 cu ft. This includes a 9.9-cu-ft frunk (front trunk), which Lucid says is larger than those of any current EV. The Air’s frunk and traditional trunk both have split-level storage compartments. One side of the trunk also opens up to the rear seats to accommodate long packages.

Design cues include a low-slung streamlined posture with a single character line that stretches all the way around the car. The intent, says design chief Derek Jenkins, is to be “effortlessly sleek, something that just flows through the air without being overly aggressive.”

Other highlights include a panoramic glass room and a “micro lens” LED headlamp array that Lucid claims is the brightest and most precise lighting system in the industry. Hidden air intakes in the light bar help cool the headlights and create an aerodynamic curtain around the side mirrors.

In the rear, the Air’s single piece taillight stretches from side to side. Lucid says it’s the largest taillight in a production car.

The interior features a 34-inch curved display that “floats” above the dashboard. A retractable central Pilot Panel within easy reach of the driver and front passenger can be used to control certain features. 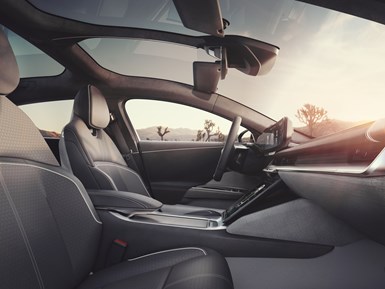 There also will be several precision-milled physical controls, including ribbed turbines for steering wheel functions, a volume control roller and alloy toggle switches for climate settings.

Other goodies include a 21-speaker audio system, facial recognition and a built-in Amazon Alexa digital assistant. Owners also will be able to add or enhance features via over-the-air software updates.

On the tech front, the Air features 19 standard safety and driver-assist systems, including adaptive cruise control, lane centering and automated parking. Another eight will be available later as options.

Level 2 and eventually Level 3 automated vehicle capabilities will be made possible via an industry-leading 32 sensors. The list includes 13 cameras, 12 ultrasonic sensors, six radar units and a lidar system.

The latter is said to be the world’s first standard high-resolution lidar in an EV.

A geo-fenced HD mapping works in tandem to support the various sensors.

Lucid will begin pilot production of the new EV later this year at its Casa Grande, Ariz., factory.

Deliveries will start next spring with the Dream Edition. It will be followed in mid- and late-2021 by the Grand Touring and Air Touring models, respectively. 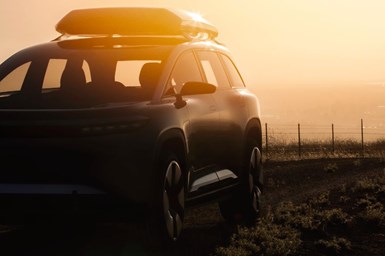 The entry-level Air will hit the streets sometime in 2022.

Lucid already is taking $7,500 refundable deposits for the Dream Edition and $1,000 for the other models.

In addition to the Air, Lucid is developing an all-electric crossover. The carmaker released several photos of the vehicle, codenamed Project Gravity, during the online unveiling of the Air.