It’s been a big year for Luminar Technologies.

The Palo Alto, Calif.-based lidar specialist has won several new contracts, beefed up its staff with industry veterans, received a new investment from Daimler Trucks and is on the verge of being listed on NASDAQ via a reverse merger that values the startup at more than $3 billion.

The program with Mobileye will allow Luminar to further test, refine and validate its technology in real-world conditions as it prepares to launch commercial applications. 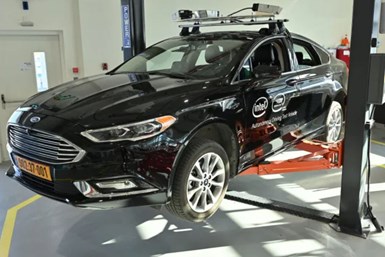 Mobileye, which was acquired by Intel in 2017, supplies cameras and processing systems to most carmakers for use in current advanced driver-assist systems.

Through its new Moovit mobility-as-a-service (MaaS) unit, Mobileye aims to launch robo-taxi services. Pilot programs are due to start in Paris, Dubai, Tel Aviv and Daegu City, Korea, in 2022.

Featuring two stand-alone platforms—one is entirely camera-based, and the other uses radar and lidar—that process data independently of each other. When used together in an autonomous vehicle, the radar/lidar unit supplements the primary camera unit to improve overall capability and efficiency.

Camera systems can provide the bulk of the needed data for ADAS and semi-autonomous functions. But lidar is needed to provide the remaining 1% to enable truly autonomous operation, asserts Luminar founder and CEO Austin Russel.

Luminar claims its “Iris” technology offers 50 times the resolution and 10 times the range of other lidar, thanks to more efficient and shorter-wavelength indium gallium arsenide receivers. The company has 80 patents.

Luminar says it has development partnerships with 50 companies, including carmakers, truckmakers and MaaS specialists. The list represents 75% of the major players in the targeted market, according to the supplier.

Of the total, a dozen of the OEM development programs are being converted to production deals worth about $1.3 billion. Volvo, which also is a major investor, plans to begin outfitting vehicles with Luminar’s lidar in 2022. Several other programs are to launch by 2025.

The reverse merger with Gores Metropoulos, a so-called special purpose acquisition company, is expected to be completed next month.