A decade from now, all ride-hailing vehicles dispatched by Lyft will be electric.

At least, that’s the company’s goal. But Lyft doesn’t plan to lift a finger, so to speak, to directly help its drivers finance the cost of buying or leasing an EV. 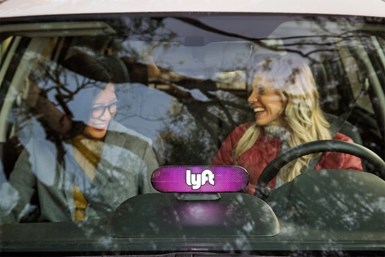 Instead, President John Zimmer says that Lyft will encourage carmakers and legislative bodies to come up with discounts and other incentives that help drivers make the transition.

If that happens, Zimmer says, EV prices should drop to parity with their piston-powered counterparts by around 2025.

Without offering specifics, Lyft says it is in talks with multiple manufacturers about possible electrification programs.

The company has been trying since 2018 to offset programs to compensate for emissions from its fleet of conventional vehicles. Lyft plans to discontinue those efforts as it switches to electric vehicles.

It won’t be an easy transition. Only about 1% of the company’s fleet is electrified now. About four in five Lyft drivers have full- or part-time jobs elsewhere, and some lease the vehicles they use for ride-hailing work—including from Lyft itself. The company says it intends to electrify much of that pool in the years ahead.

Electrifying ride-hailing vehicles would be a great way to introduce more people to the world of electrification. But Lyft, Uber and other such services are being nudged into electrification for more direct environmental reasons.

In February, a report from the Union of Concerned Scientists concluded that piston-powered ride-hailing cars emit nearly 50% more air pollution per trip than privately owned vehicles. That’s because much of the mileage racked up by ride-hailing vehicles consists of driving riderless from one customer drop-off to the next customer pick up.

Lyft and the like could reach pollution parity if two riders shared the same conventional vehicle, the report says. But it figures that switching to a hailed-EV would cut emissions in half for single-passenger trips and by about two-thirds if those trips were shared by two riders.

Lyft’s plan to electrify its entire fleet in 10 years is doable, and announcing it now is a good PR move.

The more immediate goal for the company and its competitors will be to survive the current COVID-19 inspired aversion to ride-hailing and ride-sharing services in general.

But customers seem likely to drift back as effective vaccines become available and as we all learn how to cope with life in a coronavirus world.