Lyft Inc. is opening its own test track for autonomous vehile, expanding its engineering team and adding more vehicles to its test fleet.
#Aptiv #Ford #Jaguar

Lyft Inc. is opening a dedicated test track for autonomous vehicles, expanding its 400-plus engineering team and adding specially equipped versions of the Chrysler Pacifica hybrid minivan to its test fleet.

Located within Lyft’s East Palo Alto, Calif., complex, the new facility will include intersections, traffic lights, merging lanes, pedestrian walkways and other road configurations. The company will continue to use GoMentum’s 5,000-acre proving grounds in nearby Concord, Calif., which several carmakers also use to test self-driving cars.

In a blog post, Luc Vincent, who heads Lyft’s Autonomous Driving program, says the company is now logging four times as many miles of autonomous testing per quarter than it was six months ago. The company also has tripled the number of routes its vehicles drive on public roads in California over the past year, according to Vincent. 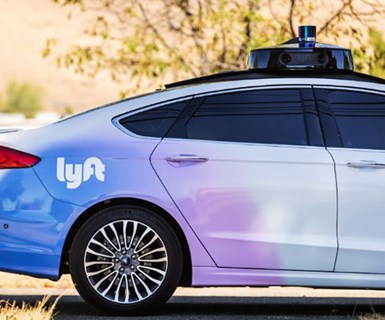 The Pacifica will join Lyft’s current test fleet that uses automated versions of the Ford Fusion sedan (left). Lyft says it chose the Pacifica, which also is used by Alphabet Inc.’s Waymo self-driving car unit, for its size and versatility in ride-sharing fleets. Lyft began offering consumer rides in Waymo’s self-driving Pacificas—with a backup driver on board—earlier this year in Arizona.

The ride-hailing company, which expects most of its fleet to be driverless in coming years, also has partnered with Aptiv, General Motors, Ford and Jaguar Land Rover on the technology. Lyft previously estimated that its operating costs can be slashed 60% by switching to autonomous vehicles.