Ride-hailing giant Lyft Inc. has halted rentals of electric bicycles in San Francisco following battery fires in two bikes in the past week.

Ride-hailing giant Lyft Inc. has halted rentals of electric bicycles in San Francisco following battery fires in two bikes in the past week.

The company, which introduced its latest pedal-assist e-bike in San Francisco last month, is investigating the cause of the fires. No injuries were reported in conjunction with the fires. 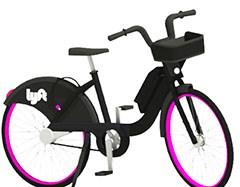 Lyft already has disabled access to the dockless bicycles so they can’t be used and now is in the process of collecting them. There are about 1,000 of the units throughout the San Francisco Bay area.

The company recently won a temporary restraining order in San Francisco, upholding a 10-year exclusivity contract that would prevent the city from issuing permits to other bike-share companies. In addition to the dockless units, Lyft also operates a station-based bicycle rental service.

Lyft became the largest bike-sharing operator in the U.S. when it acquired market-leader Motivate in July 2018. A previous-generation Lyft e-bike caught fire in New York earlier this year. There also had been problems with the bike’s braking system.