In 2018, Mack Trucks revealed a prototype refuse truck with a fully integrated Mack electric drivetrain with twin electric motors and four nickel-manganese-cobalt (NMC) lithium-ion batteries. The truck, the LR Electric, has a three-mode regenerative braking system that not only takes into account the fact that as the day goes on, the garbage truck gets heavier, but captures energy from the frequent stops that a given refuse truck makes. 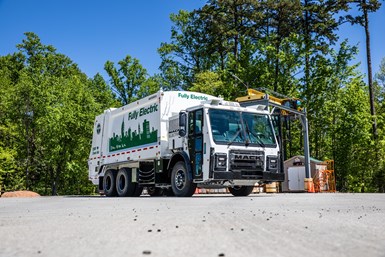 And today, Mack announced that the prototype is becoming real, with orders opening for the truck Q4 2020, with deliveries to start in 2021.

Which brings us back to Nikola.

In August it announced that it had received an order for 2,500 electric refuse trucks based on its Class 8 Tre platform. While “some” trucks are to be shipped to customer Republic Services in 2022, full production deliveries aren’t to occur until 2023.

So while it has an order, Mack hasn’t opened its book yet.

Mack will be building the LR Electric at its Mack’s Lehigh Valley Operations (LVO) in Macungie, Pennsylvania.

Nikola’s trucks are being built by IVECO in Ulm, Germany.

There is something to be said for proximity for delivery of heavy-duty trucks. (Which is why all Mack heavy-duties are assembled in Pennsylvania.)

And one clever thing related to the existing infrastructure that Mack has established, the LR Electric trucks will be monitored by a telematics solution that monitors vehicle performance, Mack GuardDog Connect, which it has been offering for its non-electric trucks for more than five years.

So it has a good grounding in keeping trucks up and running.