This award was established to get safer vehicles on the roads in India. But are there implications beyond that country?
#Ford #Jaguar #Jeep

Although what most people might know about Mahindra is that its Roxor off-road vehicle (literally an off-road vehicle, not street legal: as the company says on its site—which is www.roxoroffroad.com lest there be any doubt—"This is an off-road vehicle only, therefore it is NOT legal for use on any public street or highway. The ROXOR was designed and engineered to comply with off-highway vehicle standards such as those promulgated by ANSI/ROHVA (American National Standards Institute/Recreational Off-Highway Vehicle Association). . .”—is currently under review as to whether its previous grille looks too Jeep-like, it is worth noting that the company isn’t just making vehicles for crawling over and among rocks in its home market, India.

The company produces a compact crossover, the XUV300. 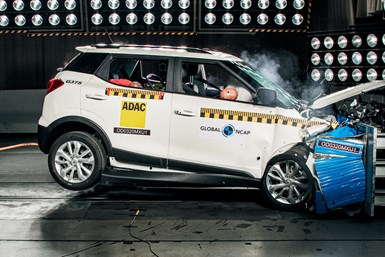 While that isn’t a surprise—what company anywhere isn’t in the crossover space?—what is important is that the XUV300 it received Global NCAP’s first-ever “Safer Choice” award, which was established in 2014 to improve safety in Indian vehicles.

This requires that a vehicle:

What’s more, all of the above must be validated in a Global NCAP designated laboratory.

Why Does This Matter?

While several people are paying attention to the possibility that the U.S. market may start to see an increasing number of vehicles from China, it is worth keeping an eye on India.

For one thing, the Ford EcoSport is built in its plant in Chennai. And as Tata Motors owns Jaguar Land Rover (which, incidentally, it bought from Ford in 2008), that India-based company certainly has deep familiarity with what American consumers are interested in.

As companies like Mahindra start making vehicles that have safety credibility, it is a smaller step to add in the technologies that American consumers are interested in, so. . . .