India’s Mahindra & Mahindra Ltd. is moving forward with a revised strategy to sell vehicles in the U.S., despite ongoing legal battles with Fiat Chrysler Automobiles NV.

Mahindra failed spectacularly in its attempt to launch a low-cost, imported pickup truck in the market a decade ago. Now it aims to gain entry with a locally built off-road model, which closely resembles FCA’s iconic Jeep CJ SUV.

Mahindra has produced 3,000 of the Roxor recreational vehicles at its new 150,000-sq-ft facility in Auburn Hills, Mich.. The company also has signed up a network of 390 “powersports” dealers across the country to sell the $15,000 SUV. 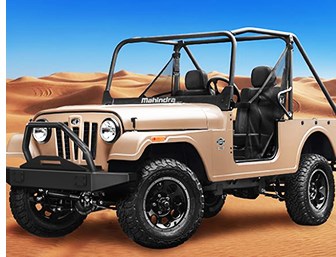 Mahindra plans to use the Roxor to demonstrate the company’s capabilities to American dealers and consumers. This would help the Indian carmaker gain a foothold in the U.S. in the less-regulated off-road market before introducing passenger vehicles, Rick Haas, who heads the carmaker’s North American operations, tell Reuters.

Noting that “getting burned makes you cautious,” Haas says the company is taking a pay-as-you-go approach this time around. The focus will be on developing an image of rugged durability rather than low cost.

But the launch of the Roxor has been challenged by FCA. It filed a complaint with the U.S. International Trade Commission (ITC) last August that claims the Mahindra model violates trademarked elements of FCA’s World War II-era Jeep CJ.

Mahindra, which produced the Willys Jeep CJ under license in India in the 1940s, maintains that the Roxor is covered by a design agreement it signed with FCA in 2009. The ITC is reviewing the case.

If Mahindra succeeds with the Roxor, Haas says the Indian company would then consider bringing passenger vehicles to the U.S. He notes that the Michigan-designed Marazzo minivan, which was recently launched in India, has fared well in international safety tests.

Mahindra also is one of five finalists being evaluated by the U.S. Postal Service to supply a next-generation mail truck. A decision is expected later this year.

Haas, who joined Mahindra in 2013 after stints with Ford and Tesla, aims to roll out Mahindra’s U.S. strategy over the next 18 months. He notes that about one-third of the brand’s powersports distributors also own car dealerships.