Germany’s Mahle GmbH has developed a prototype 48-volt battery with an optimized cell chemistry and improved cooling capabilities that the company claims can boost fuel efficiency by 12% to 15% in mild-hybrid vehicles. 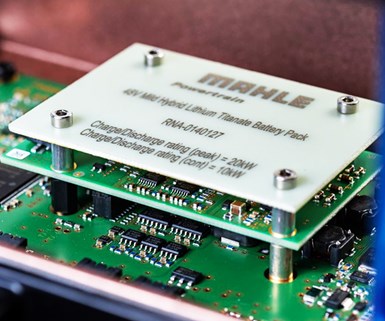 The new design uses lithium titanium oxide as an anode material. The change improves charge and discharge rates that previously have been constrained by packaging and cost tradeoffs, according to the supplier.

Cooling was enhanced by redesigning the battery’s busbars and electrical connections, which otherwise can generate excessive heat that drains power.

Initial tests of a prototype 0.5-kWh battery have shown a continuous discharge rate of more than 10 kW and peak power levels in excess of 20 kW. Further testing will be conducted in a demonstrator vehicle in coming months.