MAN Fuels Up with Hydrogen

Like most truckmakers, MAN Truck & Bus is working on a variety of alternative propulsion technologies to reduce emissions, including a range of all-electric models.

MAN also envisions a hydrogen future. But it isn’t limiting itself to fuel cells.

The company, which is part of Volkswagen Group’s Traton subsidiary, also is developing hydrogen-fueled combustion engines.

"We take our responsibility towards the environment and society very seriously," says Frederik Zohm, MAN’s executive board member in charge of research & development. "Hydrogen can be an interesting solution here, but then infrastructure needs to be significantly expanded.” 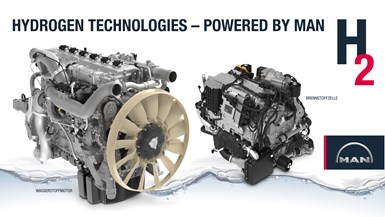 To develop the technology, MAN has established a hydrogen campus within its diesel engine facility in Nuremberg, Germany, where it will partner with two local universities: Friedrich-Alexander Erlangen-Nurnberg (FAU) and Nuremberg Tech (THN).

FAU will focus on basic research, while THN will use its expertise in applied research. MAN will coordinate the program and integrate the technology into fuel cell systems and hydrogen-fueled combustion engines for trucks and buses.

Hydrogen engines are nothing new. In fact, the first internal combustion engine (developed in Europe by Isaac de Rivaz) was designed to run on hydrogen. That was in 1804.

Several other inventors experimented with hydrogen ICEs in the late 1800s, but advances in diesel and gasoline fuels soon pushed it to the background.

More recently, BMW, Daimler and Mazda (with a modified version of its rotary technology) have tested hydrogen engines. But high costs and a lack of a hydrogen infrastructure—along with advances in hybrid and all-electric systems—have stalled development efforts.

MAN plans to build prototype fuel cell-powered and hydrogen-fueled ICE vehicles within the next year.

Practical trials in cooperation with select customers are planned for 2023/24. The aim is to test the entire hydrogen ecosystem for use in long-distance freight transportation, according to the truckmaker.

“As a commercial vehicle manufacturer, we are facing our industry’s biggest transformation since the invention of the diesel engine,” Zohm says. “Back then, MAN gave Rudolf Diesel the money and equipment he needed to develop his engine. These days, it is all about successfully industrializing alternative drive systems like battery-electric drives, fuel cells and hydrogen combustion engines.”