Some companies can make highly complex products in small numbers. Others specialize in the opposite: relatively simple items in high volumes.

The auto industry can do both. That makes the industry uniquely positioned to quickly produce needed medical equipment in response to the coronavirus, as is evident by the growing number of carmaker and supplier plants that have ramped up production of everything from face masks, shields and gowns to respirators and ventilators over the last month.

Ford and GM Execs on 60 Minutes

It also reinforces the importance of manufacturing expertise and flexibility during such a critical time in the world’s history, Ford Chairman Bill Ford tells 60 Minutes. 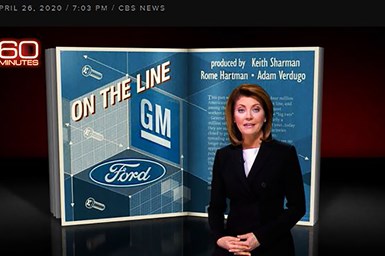 Ford spoke at the company’s Rawsonville plant in Ypsilanti, which now is producing ventilators. Barra was filmed at GM's transmission plant in Warren, which is making face masks.

Here are a few takeaways and quotes.

The rapid spread and deadly consequences of the coronavirus required a speedy response. GM and Ford were up to the challenge.

In addition to face masks and other personal protection equipment, Ford and GM both are producing ventilators under non-profit contracts with the federal government. Ford, in partnership with GE Healthcare, is due to deliver 50,000 units by mid-July, while GM has committed to supply 30,000 by the end of August.

Asked what his team’s marching orders were, Bill Ford responded that none were needed. He says the company immediately jumped into action and began working with healthcare providers to identify needs and how the carmaker could help.

Barra notes that GM went from initial discussions to the production of ventilators in three weeks. The company secured sourcing for about 400 different parts the weekend after first meeting with partner Ventec Life Systems to assemble ventilators at GM’s Kokomo, Ind., facility, which normally makes small electrical components.

In the initial flight to Seattle for the meeting, Phil Kienle, vice president of manufacturing for GM’s North America operations, set the tone for his team: Assume a family member has tested positive for COVID-19 and act with the appropriate urgency to help protect them. In response, he says, GM and Ventec “pulled off a miracle.”

Lessons Learned and the “New Abnormal”

In addition to producing ventilators, Barra says the Kokomo plant serves as a beta site in terms of setting safety protocols for resuming automotive production. Barra tells O'Donnell that temperature scanning before entering a facility is one of several new normal procedures, or “the new abnormal” as she calls it, that will be implemented.

Ford laments that it’s terrible that it takes a crisis to remind people how important manufacturing is. “The lesson is that manufacturing really matters, and it matters to this country in good times when people may not be thinking of it and times when the country really needs it.”

The two executives are confident the auto industry and their companies will survive the pandemic and eventually get back to business, despite mounting losses and the need to take out billions in credit lines.

Citing a strong balance sheet and lessons learned since the last downturn, Barra says GM "will get through this."

Ford says it’s too early to forecast what effect the pandemic will have on sales and the overall economy. But he doesn’t envision a government-backed bailout like the auto industry needed to survive the 2008 recession.

For now, he says the focus is on producing medical equipment and resuming auto production. “We’d all like to get back to work soon, but we have to do it safely. That’s not a political question, that’s a scientific question.”

During the segment, O’Donnell also talked with several employees who have volunteered to work at the Ford plant and GM’s Kokomo, Ind., facility that is making respirators.

The full interviews and inspirational stories can be viewed online at cbsnews.com.