Maserati Bolts Ahead with Product Blitz

All new models will include Folgore-badged electric variants
#europe #Maserati

The more Maseratis the merrier? That’s the plan at least as Fiat Chrysler’s trident brand prepares to introduce 13 new models by the end of 2024.

Each vehicle is due to get an electric variant, which will be marketed under the company’s new Folgore (Italian for thunderbolt) sub-brand.

FCA is trying to reposition the Italian nameplate to better compete against its German luxury brand rivals (Audi, BMW and Mercedes) as well as take on Ferrari, Lamborghini and Tesla.

But it first has to revive Maserati, which saw its global deliveries plunge 45% last year. Exacerbated by COVID-19, Maserati’s year-over-year sales fell another 52% in the second quarter that led to a $117 million operating loss for the period.

Help Is on the Way

The new car rollout begins with the MC20 supercar, which will be introduced early next year. 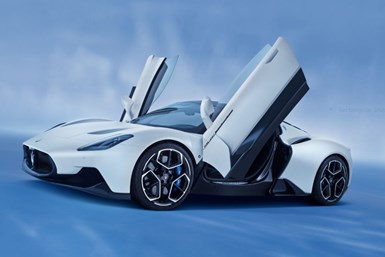 Maserati took the wraps off the all-new model this week. The $230,000 MC20 mid-engine coupe is expected to compete against the Ferrari F8 Tributo and Lamborghini Huracan.

In case you’re wondering, MC stands for Maserati Corse. Corsa is Italian for racing, which is key part of Maserati’s plans for the MC20.

The car is powered by Maserati’s new twin-turbo Nettuno V-6 that generates 630-hp and 538 lb-ft of torque, making it the most powerful production model in the carmaker’s history. Mated with an 8-speed, dual-clutch transmission, the powerplant can propel the MC20 from zero to 62 mph in less than 2.9 seconds on its way to a top speed of about 203 mph.

A convertible and electric variant are due to follow the coupe in 2022. 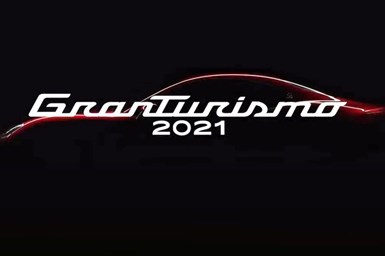 During the online M20 reveal, Maserati also teased images of the next-generation GranTurismo and an all-new compact crossover vehicle. Both models will be introduced in 2021.

Named after the north-east wind from the Mediterranean Sea, the Grecale crossover will be slotted under the Levante in Maserati’s lineup. It will share a platform with the Alfa Romeo Stelvio and be built at FCA’s plant at Cassino, Italy, where Alfa’s Stelvio and Giulia are produced. 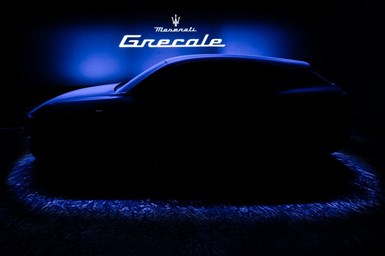 SUV/crossovers are expected to account for 70% of Maserati’s sales by 2025, with the Grecale being the volume leader.

A new GranCabrio sports car and next-generation versions of the Quattroporte sedan and Levante also are in the works.

Maserati’s first EVs will be electric versions of the GranTurismo and GranCabrio in 2022. The company’s first electrified model, a hybrid version of the Ghibli luxury sedan, debuted earlier this year.

All upcoming Folgore EVs will be powered by three electric motors, with one up front and two in the rear, to enable all-wheel drive and torque vectoring. An 800-volt battery system will be used to boost driving range and speed recharging times.