Full EVs on tap for next year
#Fiat #Maserati #AlfaRomeo 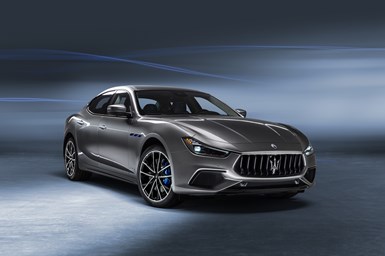 But the effort is starting with more of a flicker than a blast.

Maserati’s first model under the plan is the 2021 Ghibli sedan, which gets a mild-hybrid system. It will be followed by mild-hybrid variants of the Quattroporte flagship sedan and Levante crossover and a pair of EVs next year.

Mild-hybrids are becoming increasingly popular in Europe, where regulations are much more stringent, as a relatively low-cost way to boost efficiency and reduce emissions.

Maserati says it opted for a mild-hybrid architecture over plug-in system because the latter would add too much weight.

Moreover, the battery and other electronics likely would have had to been packaged in the rear of the vehicle, creating an uneven weight distribution. That, in turn, would have diminished ride and handling performance, which is one of the traits Maserati is known for.

The rear-wheel-drive Ghibli teams a turbocharged 2.0-liter 4-cylinder engine with an 8-speed automatic transmission and limited-slip differential. The engine is a modified version of the system used in various Alfa Romeo models.

The 48-volt mild-hybrid system features a belt-driven starter/generator and an electric supercharger “eBooster.”  The generator recovers braking and deceleration energy, which is used to power the eBooster and complement the turbocharger.

The gasoline four-banger engine is 176 lbs lighter than the V-6 diesel it replaces. Maserati claims the hybrid system will produce 25% fewer carbon dioxide emissions than the diesel.

The Ghibli Hybrid also gets some design tweaks—including a new front grille and revised taillights—as well as an updated interior with a new instrument cluster and a 10.1-inch infotainment touchscreen.

The exhaust system features specially designed resonators, which the carmaker says enables the 2.0-liter engine make the “unmistakable sound” of a Maserati without being artificially enhanced.

Sales start this autumn in Europe. There are no immediate plans to offer the hybrid model in the U.S.