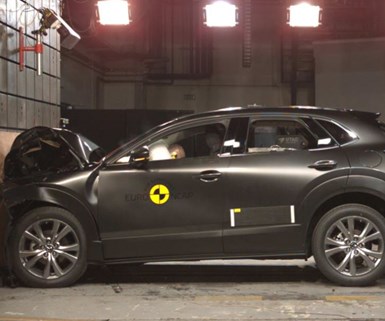 Officials from Thatcham Research, which conducts the tests, praised the CX-30’s structure and restraint systems. The vehicle received top scores in full-width barrier, side impact and side pole tests, which contribute to the adult occupancy scores. In other categories, the CX-30 scored 86% for Child Occupant Protection, 80% for Vulnerable Road Users and 77% for Safety Assist features.

The fourth vehicle tested in this round, the Vauxhall Corsa sedan, was awarded four stars. It narrowly missed the top ranking due to the performance of its seat and head restraints in whiplash testing, according to Thatcham.